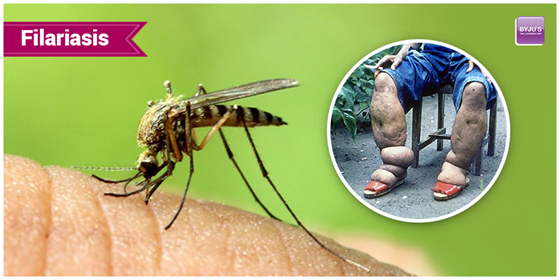 Filariasis a parasitic disease transmitted by black flies and mosquitoes. These parasites are thin, round, worm-like organisms. They appear white or translucent when observed under a microscope.

The life span of filariae would be around 5 to 7 years. During their lifespan, they produce millions of larvae. The size of the female is between 250 and 300 μm long and the size of the males is roughly half as long as the females.

How is Filariasis Transmitted?

The causative organisms for Filariasis is a roundworm of the Filarioidea type. However, this is a vector-borne disease, with the primary vectors being mosquitoes and black flies. The infection spreads when a mosquito bites an already infected individual and then, goes on to bite a healthy person. This causes the larva of this parasite to enter the bloodstream of a healthy host and multiply. The complete stage of the larva to adult filarial worms is carried out within the lymphatic system. Once matured, the adult filarial worm starts to release larval forms called microfilariae. The newly generated microfilariae again enter into the mosquito along with the host’s blood and the cycle repeats itself. This parasitic disease is categorized on the basis of which body part is infected:

There are more than a hundred species of filarial worms currently discovered. Among them, only 8 to 9 are categorized as filarial parasites, which causes infections in human beings. 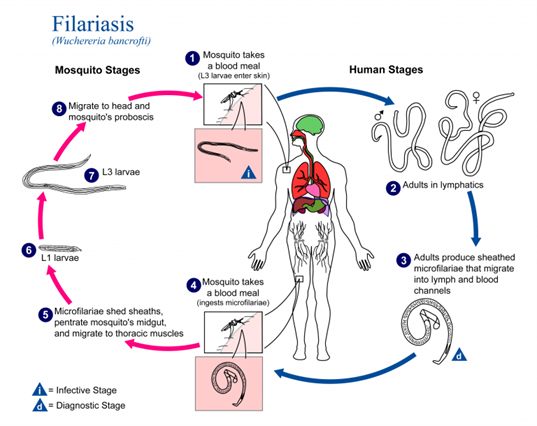 The general filariasis symptoms during its early stages include:

The filariasis symptoms seen in the later stage include:

The formation of pus in a cell due to the dying worms or a secondary bacterial infection results in:

It is quite difficult to diagnose this disease as the symptoms vary from one type to another type and the symptoms diagnosed in the early stage are similar to normal viral and bacterial infections.

However, there are a few diagnostic processes carried out through body analysis, physical examination, body fluid test, including a blood test and urine test. Apart from these tests, few blood tests are carried out during the nighttime as the larvae are found most active at night.

A popular diagnostic procedure involves blood being drawn from a larger vein and smeared on a glass slide. This slide is then examined under an electron microscope to check for the presence of parasitic larval roundworms. The presence of Filariasis is examined with the help of the Giemsa stain. The other diagnosis for subcutaneous filariasis is performed with a skin snip test.

In spite of all these measures, if filariasis is contracted, the best treatment would be a course of anthelmintic drugs or antibiotics. Anthelmintic would be the best option as it directly kills the worms. But if this isn’t feasible, antibiotics are a great alternative because they target the symbiotic bacteria that are present inside the worms. When the antibiotics kill these bacteria, the worms cannot survive and thrive inside their hosts, eventually hampering reproduction.

The parasitic roundworms belong to the family of Filarioidea and Phylum Nematoda. This particular species is known by the name filarial worms or filariae and the infection caused by them is called filariasis.

General symptoms of filariasis include fever, chills, headache and skin lesions. Further progression of the disease will disfigure the patient with excessive swelling of the limbs.

Find more information on filariasis, its causes, filariasis symptoms or any other related topics by exploring BYJU’S Biology.

Test your Knowledge on Filariasis!
Q5