Ever wondered why your neck region gets swollen when you are down with cold and flu? This is because WBCs accumulate around that region, which is our bodies’ defence mechanism in the blood.

Antibodies are not found at a place as such, but whenever our immune system encounters antigen or a pathogen, B cells get activated immediately releasing antibodies into the bloodstream. These immunoglobulins undergo mitosis resulting in cell division and continuously produce antibodies as a result of producing more cells. These antibodies remain in the blood for some time but B cells remember these antigens and repeat the same course of action whenever they reappear in our body.

Antibody (Ab) is also known as an immunoglobulin(Ig). These are large, Y-shaped blood proteins produced by plasma cells. They bind to foreign particles and invade them. These particles are foreign bodies that get attacked by Antibody.

Antigens are foreign pathogens that invade the body and have the capability to give rise to a response from our immunity system either by grouping up with a larger molecule or alone after binding with antibodies for a particular immune response. Hence, antigens stimulate the production of antibodies by the immune system.

An antibody has a Y-shaped structure, made up of four polypeptide subunits. Each subunit has two identical light and heavy chains.

The C-terminus of the heavy chains forms ‘fragment crystallization’ (Fc) domain, which helps in the interaction with the effector cells.

All four polypeptide subunits are held together by disulfide and non-covalent bonds.

The heavy chains of the antibodies contain a variable region and three constant regions. Each antibody has two identical antigen-binding sites and they differ in the antibodies.

Also Read: Difference between B cells and T cells

IgM is the first antibody produced in response to a microbial attack by B cells.

It is the largest antibody and is found in a pentameric form.

It circulates in the blood and lymph and constitutes 6% of the total antibody content in the serum.

It is involved in agglutination and opsonization.

It has a large number of antigenic sites on its surface and therefore facilitates efficient activation of the immune system.

Most abundant isotype in the plasma, and comprises 80% of the total antibody content in the serum. It detoxifies substances that are harmful and recognizes the antibody-antigen complex.

It is transferred to the placenta through the foetus and protects the infant until its birth.

IgG is divided into four subclasses- IgG1, IgG2, IgG3, and IgG4. Among these, only IgG3 and IgG4 possess the ability to cross the placenta.

The heavy chains of IgG have two antigen-binding sites and are of the sub-class gamma.

It facilitates the process of phagocytosis and provides immunity to the developing foetus. It neutralizes the toxins and pathogens and offers protection to the body.

Usually found in liquids such as breast milk, serum, saliva, fluids of the intestine. IgA in breast milk protects an infant’s gastrointestinal tract from microbial activity.

It constitutes 13% of the total antibody content in the serum and is divided into 2 sub-classes- IgA1 and IgA2. Among these, IgA1 is highly found in the secretions and is also called the secretory immunoglobulin.

It exists in both monomeric as well as dimeric forms.

It provides the first line of defence against the pathogens and limits inflammation. It also activates the complement pathway and participates in the immune response.

It is involved in the production of the antibody by B cells.

It comprises less than 1% of the total antibody content in serum.

It acts as a receptor on B cell surface and participates in B cell activation and differentiation.

IgE is present in the least amounts, around 0.02% of the antibody content in the serum.

These are present in the linings of the respiratory and intestinal tracts and respond to allergic reactions.

This is found as a monomer in the body and weighs about 200,000 Dalton.

Following are some of the key functions of antibody:

Production And Mechanism Of Antibody

Whenever an organism’s immune system encounters a foreign particle for the first time, macrophages interfere and capture to break them down so as to pass them to B cells. Once these antigens are presented, B cells begin production of a new antibody which would contain a unique paratope (site at which antibody binds with antigen) to bind with a specific epitope (site in the antigen that binds with antibody). Each lymphocyte of B cells generates a unique antibody against a unique epitope. Once the encoding is done by B cells, it releases antibodies which then bind with specific pathogens resulting in their elimination from our bodies.

This is achieved either by direct attack of antibody on pathogens (usually when pathogens are viruses) or by binding to pathogen’s surface (when the pathogen is a bacteria) and sending signals to the rest of the immune system to eliminate the pathogen. These cells remain in the body forever, ready to attack, should they re-enter the body.

Difference Between Antigen And Antibody 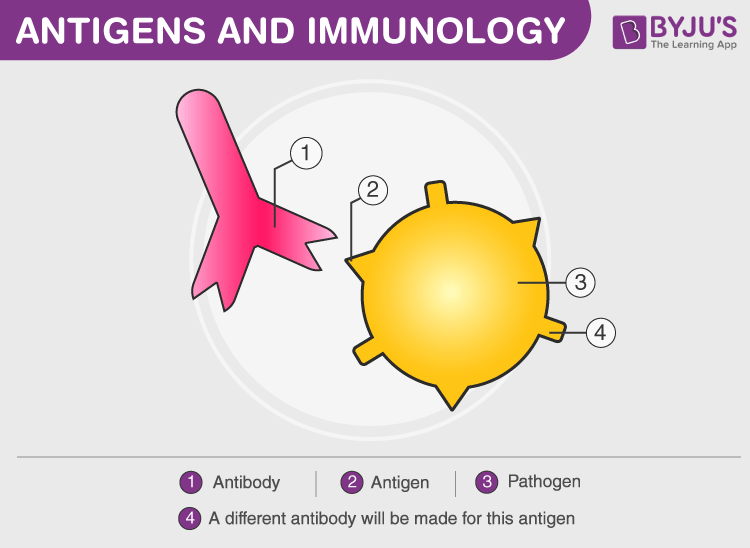 The article gives a detailed account of antibody including antibody structure, types of antibodies, functions of antibody, and its production. It also explains how an antibody is different from an antigen.

What is the study of the interaction of antigen and antibody in blood known as?

The study of interaction between antibody and antigen in blood is known as serology.

What are the 5 different types of immunoglobulins?

Antibodies or immunoglobulins(Ig) are of five different isotypes. This classification is on the basis of their H chains. IgG, IgM, IgA, IgD and IgE are those five types.

What is the structure of antibody molecules?

Antibody molecules are Y-shaped structures made of four polypeptide chains. These can be distinguished as two light and two heavy chains.

How is an antibody molecule represented?

Due to the presence of two heavy and two light chains, an antibody molecule is represented as H2L2.
Learn Better through BYJU'S Quiz
Q5