Budget Line: All You Need to Know

The budget line, also known as the budget constraint, exhibits all the combinations of two commodities that a customer can manage to afford at the provided market prices and within the particular earning degree.

The budget line is a graphical delineation of all possible combinations of the two commodities that can be bought with provided income and cost so that the price of each of these combinations is equivalent to the monetary earnings of the customer.

In other words, the slope of the budget line can be described as a straight line that bends downwards and includes all the potential combinations of the two commodities which a customer can purchase at market value by assigning his/her entire salary. The concept of the budget line is different from the Indifference curve, though both are necessary for consumer equilibrium.

The two basic elements of a budget line are as follows:

Equation of a Budget Line

Px is the cost of product X.

Qx is the quantity of product X.

Py is the cost of product Y.

Qy is the quantity of product Y.

M is the consumer’s income.

Additional Reading: What is the Government Budget?

Example of a Budget Line

Radha has ₹50 to buy a biscuit. She has a few options to allocate her income so that she receives maximum utility from a limited salary.

To get an appropriate budget line, the budget schedule given can be outlined on a graph. 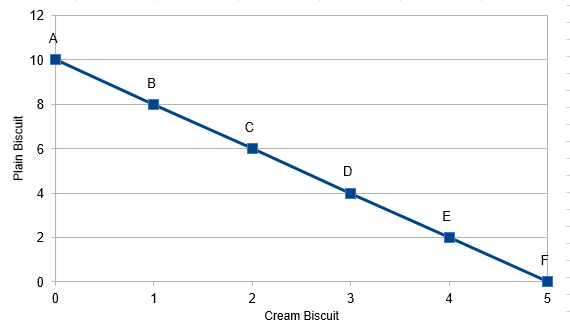 The budget set indicates that the combinations of the two commodities are placed within the affordability margin of a consumer.

Also, read: What is a Budget Set?

Some of the properties of the budget line are as follows:

Negative slope: If the line is downward, it shows a reverse correlation between the two products.

Straight line: It indicates a continuous market rate of exchange in individual combinations.

Real income line: It denotes the income and the spending size of a customer.

You might also want to know about: Economic system in India

Assumptions of a Budget Line

The budget line is mostly based on the assumption and not reality. However, to get clear and precise results and summary, the economist considers the following points in terms of a budget line:

Two commodities: The economist assumes that the customers spend their income to purchase only two products.

Market price: The cost of each commodity is known to the customer.

Expense is similar to income: It is assumed that the customer spends and consumes the whole income.

A shift in Budget Line

A budget line includes a consumer’s earnings and the rate of a commodity. These are the two important factors that shift the budget line.

This concludes the topic, ‘Budget Line’. It is an important concept in economics for students of commerce. To read more about such informative concepts, stay tuned to BYJU’S.