Liberalisation is the process or means of the elimination of control of the state over economic activities. It provides a greater autonomy to the business enterprises in decision-making and eliminates government interference.

Liberalisation was begun to put an end to these limitations, and open multiple areas of the economy. Though some liberalisation proposals were prefaced in the 1980s in areas of export-import policy, technology up-gradation, fiscal policy, and foreign investment, industrial licensing, and economic reform policies launched in 1991 were more general. There are a few significant areas, namely, the financial sector, industrial sector, foreign exchange markets, tax reforms, and investment and trade sectors that gained recognition in and after 1991.

Since the adoption of the New Economic Strategy in 1991, there has been a drastic change in the Indian economy. With the arrival of liberalisation, the government has regulated the private sector organisations to conduct business transactions with fewer restrictions.

For the developing countries, liberalisation has opened economic borders to foreign companies and investments. Earlier, the investors had to encounter difficulties to enter countries with many barriers. 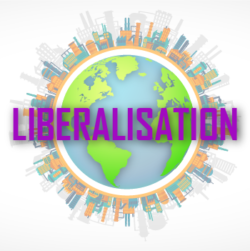 These barriers included tax laws, foreign investment restrictions, accounting regulations, and legal issues. Economic liberalisation reduced all these obstacles and waived a few restrictions over the control of the economy to the private sector.

Positive Impact of Liberalisation in India

Free flow of capital: Liberalisation has enhanced the flow of capital by making it affordable for  the businesses to reach the capital from investors and take a profitable project.

Diversity for investors: The investors will be benefitted by investing a portion of their business into a diversifying asset class.

Impact on agriculture: In this area, the cropping designs have experienced a huge change, but the impact of liberalisation cannot be accurately measured. Government’s restrictions and interventions can be seen from the production to the distribution of the crops.

Negative Impact of Liberalisation in India

The weakening of the economy: An enormous restoration of the political power and economic power will lead to weakening the entire Indian economy.

Technological impact: Fast development in technology allows many small scale industries and other businesses in India to either adjust to changes or shut their businesses.

Mergers and acquisitions: Here, the small businesses merge with the big companies. Therefore, the employees of the small companies may need to enhance their skills and become technologically advanced.[1] This enhancing of skills and the time it might take, may lead to non-productivity and can be a burden to the company’s capital.

Several sectors were affected by the impact of Liberalisation. A few economic reforms were:

What is the meaning of Liberalisation in Economics?

Liberalisation in economics means minimising the government’s restrictions and regulations in an economy, in return for higher involvement of private organisations. In short, liberalisation means the removal of restrictions in order to promote economic development.

Name one example of Liberalisation.

One example of Liberalisation is the European Union liberalising electricity and gas.

What is one role of Liberalisation?

The one important role of liberalisation is to ease the government controls to encourage economic development.

What are the pros of Liberalisation?

The following are the pros of Liberalisation:

What are the 2 main objectives of Liberalisation?

The following are the two main objectives of Liberalisation: