Economic Reforms refer to the fundamental changes that were launched in 1991 with the plan of liberalising the economy and to quicken its rate of economic growth. The Narasimha Rao Government, in 1991, started the economic reforms in order to rebuild internal and external faith in the Indian economy.

The reforms intended at bringing in larger cooperation of the private sector in the growth method of the Indian economy. Policy changes were proposed with regard to technology up gradation, industrial licensing, removal of restrictions on the private sector, foreign investments and foreign trade. The essential features of the economic reforms are – Liberalisation, Privatisation and Globalisation, commonly known as LPG.

To put it in other words, “Economic reforms” normally indicates to deregulation or at times to decrease in the size of government, to eliminate deformities caused by management or the presence of administration, rather than current or raised regulations or government plans to lessen perversions created by market failure. 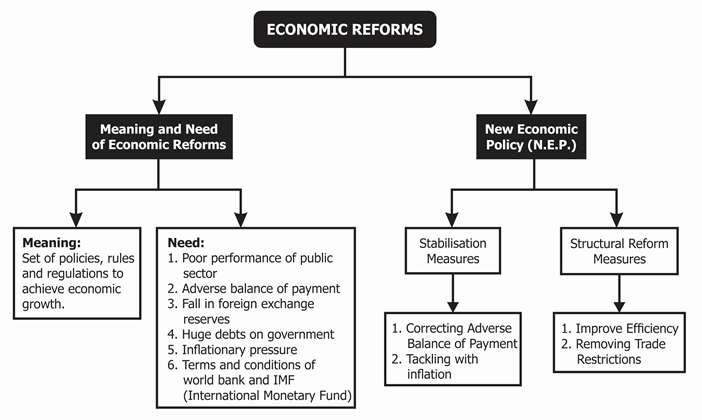 Why were Economic reforms introduced in India?

Economic reforms were introduced in India because of the following reasons:

Poor performance of the public sector