Agriculture Sector on The Eve of Independence

Indian economy is agriculture based, or we can say that India is an agrarian economy. This is evident from the fact that the national income of India consists of 70% of the income generated from agriculture.

Before independence, the economy was 95% dependent on agriculture and the revenues earned from agriculture.

It is worthwhile to mention that around 85% of the population was living in villages, and the only means of subsistence was agriculture.

Concerning agriculture, the situation of the Indian economy on the eve of independence was disheartening.

Agriculture, even after being the most important sector, was facing economic deterioration and stagnation in the economy.

The following were witnessed with the changes in agriculture:

High vulnerability means a reaction to any situation concerning the change in agricultural factors.

If the country witnesses low rainfall in a month, then the resulting impact will be low levels of output and high rates of crop failure.

Low productivity levels were witnessed, and the levels of output declined irrespective of a large area for cultivation.

Here are some factors that led to the stagnation of the agriculture sector.

Agricultural Sector during the Independence Causes of Stagnation of Indian Agriculture During the Colonial Period 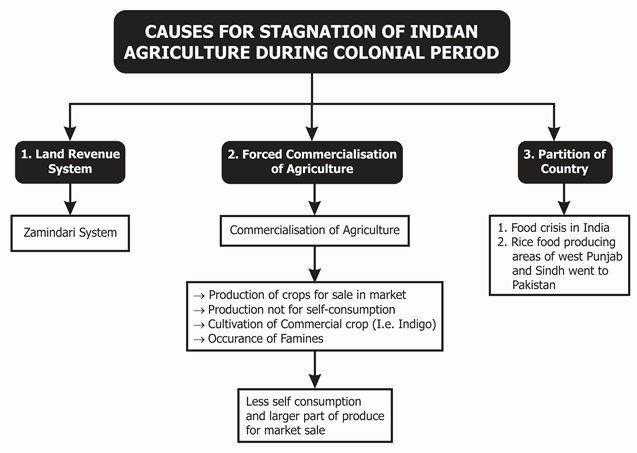