The GAR Special Report on Drought 2021 explores the systemic nature of drought and its impacts on the achievement of the Sendai Framework for Disaster Risk Reduction, the Sustainable Development Goals and human and ecosystems health and wellbeing.

It was released by UN Office for Disaster Risk Reduction (UNDRR) and the report is structured to build broad awareness of the nature of drought and the experience across the world of living with drought. It also builds the case for a new approach to drought risk management.

Moving forward, in this article, we shall discuss the key findings under the GAR special report, the impact of drought on the ecosystem and the threat that climatic change projections suggest in terms of drought.

All Government and IAS Exam aspirants must refer to the information discussed below, important from the general awareness questions’ perspective.

Aspirants can also refer to the links below to complement their exam preparation:

Key Findings of the GAR Special Report on Drought 2021

The GAR Special Report on Drought 2021 was released on June 17, 2021. This day is also observed as the World Day for Combating Desertification and Drought. Given below are the key findings as per the report released by UNDRR:

The Intergovernmental Panel on Climate Change (IPCC) defines drought as “a period of abnormally dry weather long enough to cause a serious hydrological imbalance.” It leaves a severe impact on the ecosystem, livelihood, biodiversity and various other aspects. The same has been given below, as discussed in the UNDRR’s Global Assessment Report 2021:

While it is impossible to prevent the occurrence of droughts or eliminate residual risk (reduce risk to zero), the resulting impacts may be mitigated to a certain degree through appropriate surveillance and management strategies. 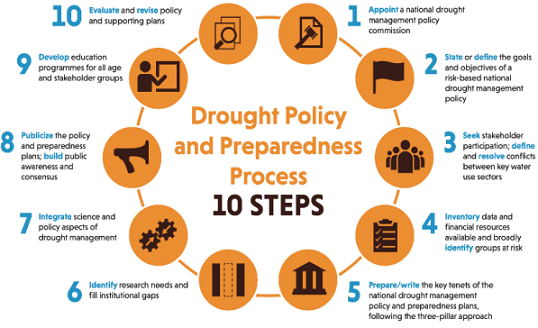 Given below are the measures that can be taken for drought risk management:

The Indian case study mentioned in the report deals with the Deccan Plateau region of India (about 43% of southern and eastern India).

Aspirants can also get acquainted with the UPSC Syllabus for the prelims and mains examination at the linked article.