The UN Convention to Combat Desertification aims to combat desertification and the ill effects of drought. Learn about this convention, UNCCD COP14, UNCCD 2018-30 Strategic Framework and basic facts for the IAS Exam.

The UNCCD is a United Nations convention aimed at addressing desertification and droughts. 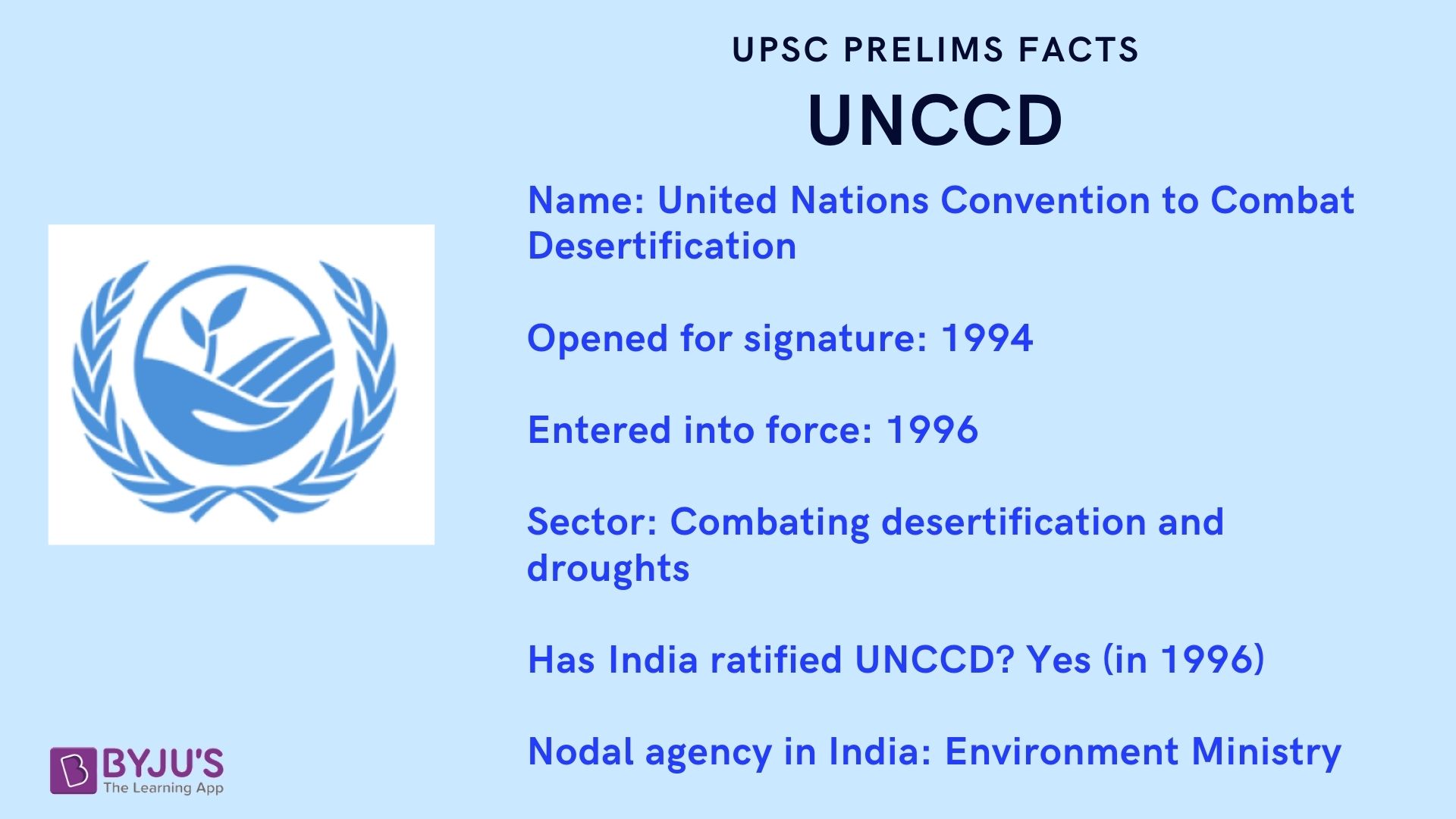 India ratified the Convention to Combat Desertification in December 1996.

The UNCCD COP 14 (14th edition of Conference of Parties) ended on 13 September 2019. This was the first time that India hosted an edition of the UNCCD COP. India is among the select few countries to have hosted the COP of all three Rio conventions on climate change, biodiversity and land.

Desertification is the process by which the biological productivity of drylands (arid and semiarid lands) is reduced due to natural or manmade factors. Desertification does not imply the expansion of existing deserts. Some of the causes of desertification are deforestation, over-cultivation, overgrazing, imprudent irrigation practices, etc. Further information on Desertification is available on the linked page.

The UNCCC 2018-30 strategic framework reaffirmed the  2030 Agenda for Sustainable Development and the Addis Ababa Action Agenda which is an integral part of it and recognizing the important impact that UNCCD implementation will have on the overall achievement of their objectives. The following are the important points of UNCCC 2018-30 strategic framework:

The conference of the parties is the meeting of the ratifying governments. There has been 14 UNCCD COP till date. The latest being UNCCD COP14 that took place in New Delhi in 2019.

Some important initiatives introduced through UNCCD COPs are:

Desertification is a type of land degradation in which a relatively dry land region becomes increasingly arid, typically losing its bodies of water as well as vegetation and wildlife. Desertification is a significant global ecological and environmental problem.

Is India a member of Unccd?

India ratified the UNCCD Convention on 17th December 1996. This convention can be called as “Mother convention” of the other two Rio Conventions that emerged as a major outcome of the 1992 Rio Earth Summit viz. United Nations Framework Convention on Climate Change (UNFCCC) and Convention on Biological Diversity (CBD).