One may also read:

The UN was formed following the devastating World War II, with the aim of preventing future global-scale conflicts. It was a successor to the ineffective League of Nations. The representatives of 50 governments met in San Francisco on 25 April 1945, to draft what would become the UN Charter. The Charter was adopted on 25 June 1945 and came into effect on 24 October 1945.

For more on UN evolution, check This Day in History dated October 24.

In accordance with the Charter, the organization’s objectives include maintaining international peace and security, protecting human rights, delivering humanitarian aid, promoting sustainable development, and upholding international law. At its founding, the UN had 51 member states; this number grew to 193 in 2011, representing the vast majority of the world’s sovereign states.

The UN is structured around five principal organs:

A sixth principal organ, the Trusteeship Council, suspended operations on 1 November 1994, upon the independence of Palau, the last remaining UN trustee territory.

A brief table about their primary function is given below:

Principal Organs of the United Nations

To know more about the UN and its principal organs, visit the linked article.

What are the Specialized Agencies of the UN?

There are several agencies, bodies, institutes and organisations that work under the UN system. Some of them predate the UN’s establishment and were incorporated into the UN later on, while others were founded afterwards. They perform important functions across domains, regions and sectors. The table below mentions a few significant such organisations.

The United Nations sets up international conventions, which may be legally binding on parties, on various issues and domains. Some of the important conventions, protocols, etc. are mentioned in the table below. You can read more about the conventions by clicking on their names.

India and the UN

Today, there are 26 UN agencies in India. Some of the milestones that the UN has made in India through its agencies are elaborated upon below:

Similarly, other organisations have also played a great role in India and helped in its progress towards development, health and economic improvement. For details of each organisation’s role in India, you can go through the respective articles from the table above.

India’s Contribution towards the UN

India has been an active member of the UN since its inception. In 1946, India became the first country to raise the issues of racism and apartheid in South Africa in the UN forum.

UN Reforms/What are the challenges faced by the UN? 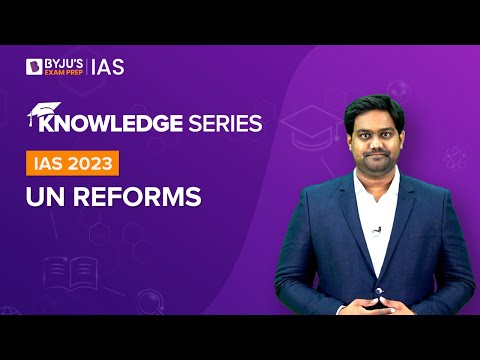 The UN has had its fair share of challenges in the years of its existence. Now there is no one single factor to those challenges but rather multi-faceted factors that make the UN’s task of fostering world peace a difficult one. Some of the challenges to the UN’s efforts for global peace are as follows:

Like all challenges, there are solutions to face them as well. Here are a few solutions on how the UN works for conflict resolution and peaceful change in an era of mistrust and division.

For more UPSC and UN-related articles, candidates can refer to the links given below: