The United Nations Office on Drugs and Crime (UNODC) is an important body under the United Nations. Such international bodies and programmes are very relevant for the IAS exam. In this article, you can read all about the UNODC, its functions and India’s relations with it.

International organisations and groupings are an important part of the International Relations section of the General Studies paper-2 in the UPSC Syllabus. International relations is a very dynamic part and is crucial for multiple papers in Prelims and Mains. Students preparing for UPSC 2021 and other Government Exams must be aware of the topic.

The United Nations Office on Drugs and Crime (UNODC) was established in order to make the world a place without the dangers of Drug Abuse and the crimes following it. UNODC also works to improve crime prevention and to assist with criminal justice reform in a number of countries.

Read about the United Nations Interregional Crime and Justice Research Institute (UNICRI)that works in close collaboration with the UNODC.

Its main functions can be classified as mentioned in the table below:

To get a list of other international organisations and their reports published, click on the linked article. 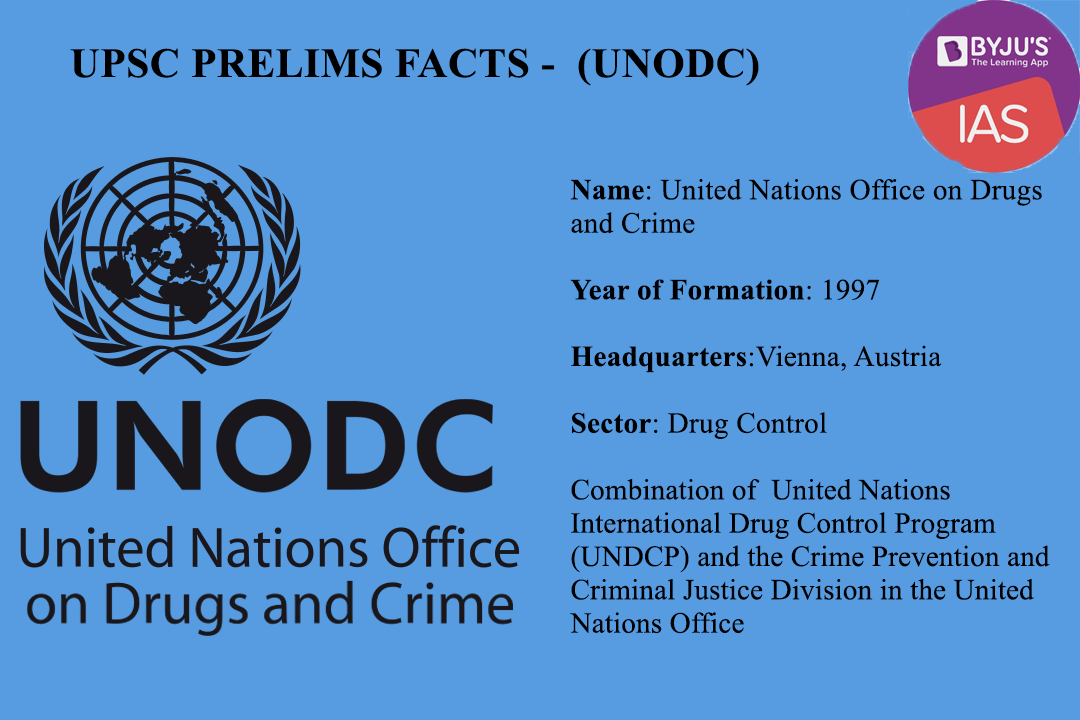 We have covered an RSTV programme on Fighting Drug Menace, click on the linked article to read more.

UNODC has a presence in India since 1987. The nodal ministries are:

Geographically, India is very close to the Golden Cresent and the Golden Triangle, the superhighways of the Asian drug trade.

The United Nations Office on Drugs and Crime (UNODC) Report said that India is one of the major hubs of trade for Illicit Drugs. The report also mentioned the global trend of purchasing drugs over the internet with the help of platforms available on the Dark Web.

The United Nations Office on Drugs and Crime (UNODC) has released a report titled ‘Synthetic Drugs in East and Southeast Asia’.

Click on the link to read more about the effects of Covid-19 on Illicit Drug Supply & Trade in India: CNA 20th May 2020.

In 2016, 18 littoral states adopted a resolution to make the Indian Ocean Region (IOR), a Drug-Free Zone. It was held at a meeting in Colombo, Sri Lanka and the declaration came to be known as the Colombo Declaration.

Click on the link to know more about the Colombo Declaration.

Aspirants can find complete information about upcoming Government Exams through the linked article. UPSC exam-related preparation materials will be found through the links given below: