The United Nations Population Fund (UNFPA) is an important programme under the United Nations. Such international bodies and programmes are very relevant for the IAS exam. In this article, you can read all about the UNFPA, its functioning, mandate, objectives and India’s relations with it.

International organisations and groupings are an important part of the International Relations section of the General Studies paper-2 in the UPSC Syllabus. International relations is a very dynamic part and is crucial for multiple papers in Prelims and Mains. Students preparing for UPSC 2021 and other Government Exams must be aware of the topic. 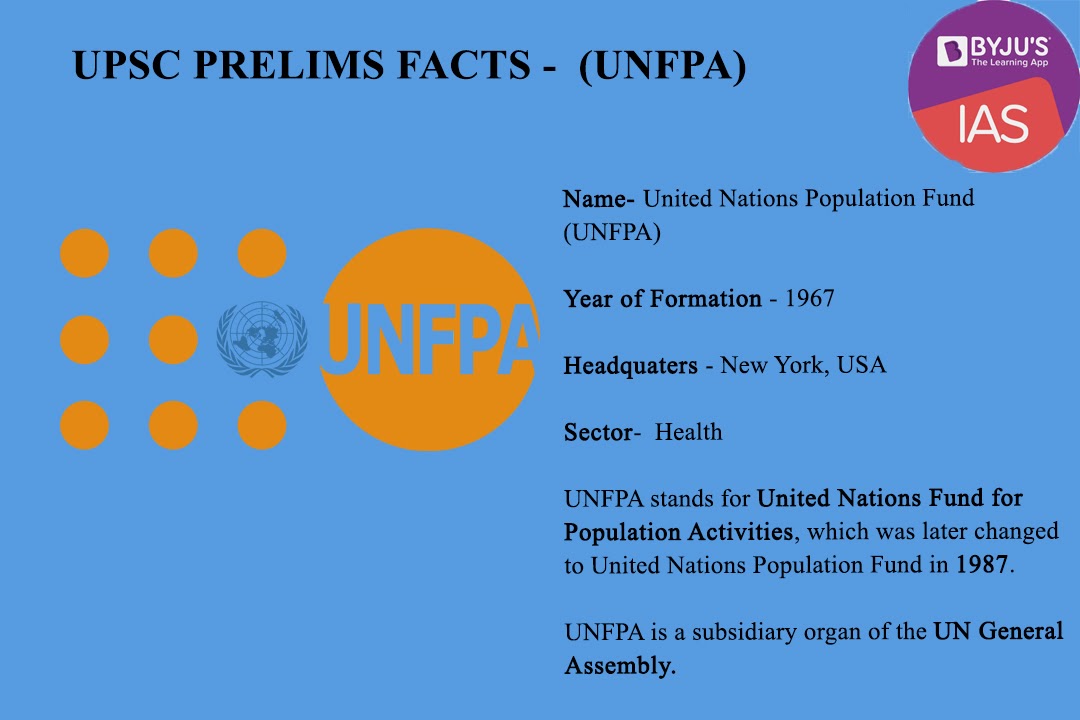 Established in 1967 as a trust fund, UNFPA is the United Nations sexual and reproductive health agency. It became operational in the year 1969. UNFPA works as a subsidiary organ under the umbrella of the UN General Assembly which is one of the Principal Organs of the United Nations.

Aspirants would find the article very helpful in preparation for UPSC examination.

Mission: To deliver a world where every pregnancy is wanted, every childbirth is safe and every young person’s potential is fulfilled.

Mandate: UNFPA has the mandate to boost awareness on population issues and to support strategies to address these. It also works to develop context-specific knowledge and capacity on population and reproductive health issues.

According to the UNFPA reports, India will be the most populous country by the year 2028, although its fertility rate has declined from about 3.6 to 2.4 children in the last three decades.

To get a list of other international organisations and their reports published, click on the linked article.

Programmes conducted in India by UNFPA

The year 2019 marks two important milestones in the field of reproductive health and rights: 50 years since UNFPA began operations, and 25 years since the landmark International Conference on Population and Development (ICPD) in Cairo.

The report shows that while much has been gained, much remains to be done to empower those who are not yet able to enjoy their rights and whose choices are still constrained. The pursuit of rights and choices for all is ongoing, with new challenges emerging all the time.

Read more about the United Nations at the linked article.