Indian Ocean Region (IOR) Interior Ministers met on 4th November 2016 in a high-level meeting in Colombo, Sri Lanka. The resolution was adopted by 18 littoral states to make IOR, a ‘Drug-Free Zone,’ and the resolution came to be known as the Colombo Declaration.

The meeting was co-hosted by the Government of Sri Lanka and the United Nations Office on Drugs and Crime (UNODC).

The article will provide you with the details on the Colombo Declaration holding importance for IAS Exam and its Prelims and Mains stages. The topic comes under UPSC GS Mains-II (Bilateral, regional and global groupings and agreements involving India and/or affecting India’s interests.)

The aspirants can read relevant information from the following links:

Who were the attendees in the Colombo Declaration?

What is the Need for the meeting?

Why was this resolution adopted?

Two of the biggest narcotics superhighways, the Golden Triangle in South East Asia and the Golden Crescent in South- West Asia, make use of the waters of the Indian Ocean to ferry their goods around illegally. In fact, it is these maritime routes that account for a significant portion of opium and heroin from Afghanistan that are trafficked along the East African coast. Both the route of the Golden Triangle and Golden Crescent can be seen in the image below: 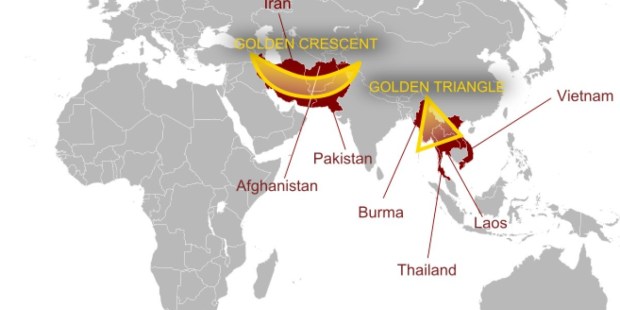 The increase in the volumes of illicit drugs along the coastlines of Eastern Africa highlights the importance of the islands that dot the Indian Ocean. Over the last three years, about 9300 kg of heroin has been seized by the Combined Maritime Forces (CMF) in trading dhows, further strengthening the argument of the Indian Ocean being a transit point for the world’s narcotics supply.

Thus to better combat this drug menace, the Columbo resolution was adopted

What are the Features of the Colombo Declaration?

The declaration calls for action of the Ministers of the littoral states of the Indian Ocean:

To get more topics to visit the UPSC Syllabus page and for more UPSC-related preparation materials visit the linked articles: