In 2016, India had deposited the instrument of accession with Turkmenistan and its accession to the agreement was approved on Feb 1, 2018, by the founding members of the Ashgabat Agreement.

This article will hence, provide you with relevant facts about the Ashgabat Agreement, India’s membership and International North-South Transport Corridor (INSTC.)

What is the Ashgabat Agreement?

Ashgabat (It used to be called Poltoratsk between 1919 and 1927) is the capital and the largest city of Turkmenistan in Central Asia, situated between the Karakum Desert and the Kopet Dag mountain range.

(Note: Students should identify these places in the map to get more familiarity)

Turkmenistan is attempting to consolidate its position as an important regional transit and transport hub, and has already improved its geographical location though other various rail projects: 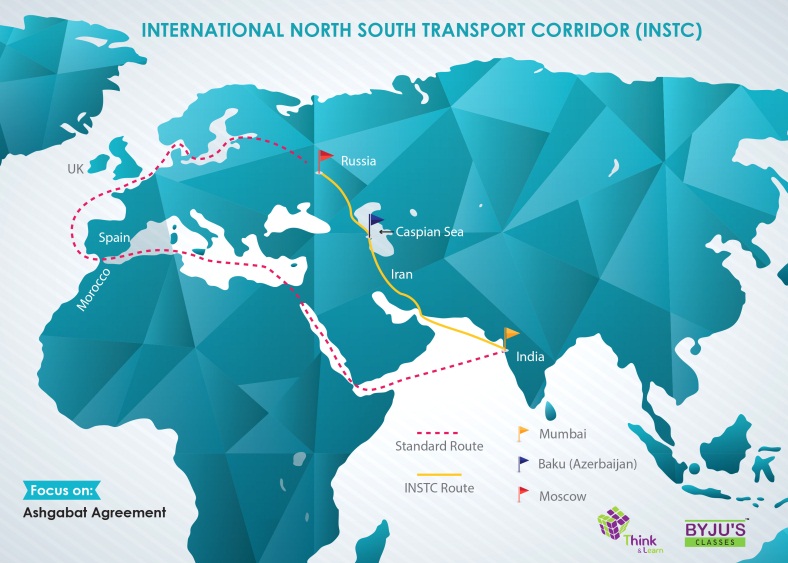 The relevance of INSTC to India – Economic and Strategic Dimensions

(Because it would be easier to access these markets through the INSTC and it would boost the competitiveness of India’s trade) (Note: Eurasian Economic Union consists of Belarus, Kazakhstan, Kyrgyzstan and Russia, & Armenia likely to join)

What are the challenges faced by Central Asian countries:

India’s intention to accede to the Ashgabat Agreement was to sync India’s Look West policy in tune with its Connect Central Asia policy. India’s Accession to the Agreement would diversify India’s connectivity options with Central Asia and have a positive influence on India’s trade and commercial ties with the Central-Asian region majorly.

A major challenge before the member countries is sustaining the momentum of progress that they have achieved in the last few years.

Also, while reading about Ashgabat Agreement, candidates should also know about the Chabahar-Zahedan rail link and International North-South Transport Corridor. From one topic, the aspirant should link a couple of related issues and read about them. That is how the Ashgabat Agreement topic will be covered holistically.

Q 1. Is India a part of the Ashgabat Agreement?

Ans. India has been admitted to the Ashgabat Agreement for the establishment of an International Transport and Transit Corridor between the Governments of the Islamic Republic of Iran, the Sultanate of Oman, Turkmenistan and the Republic of Uzbekistan signed on 25 April 2011.

Q 2. Which were the first countries to sign the Ashgabat Agreement?