Latest Update – Sagarmala Development Company Limited is set to implement the Sagarmala Seaplane Services with potential airline operators. Read more about this initiative in this article.

The Sagarmala Project has been initiated by the Government of India after Cabinet approved it in 2015 to promote port-led development in India. The project aims to harness the 7500 km long coastline of the country to unleash its economic potential. The project also seeks to boost infrastructure for transporting goods to and from ports quickly, efficiently, and cost-effectively.

In this article, you can read all about the Sagarmala Project, which is related to ports and waterway transportation in the country. This is an important topic for both the prelims and the IAS Mains.

Sagarmala Seaplane Services (SSPS) – It is an ambitious project, announced in January 2021, which is being implemented by the Sagarmala Development Company Limited. The project is being initiated under a Special Purpose Vehicle (SPV) framework through prospective airline operators.

Aim of SSPS: Facilitation of faster and hassle-free travel across the country.

The routes under the Sagarmala Seaplane Services may be operated under the government’s subsidised ‘Ude Desh ka Aam Nagrik (UDAN) scheme‘.

The list of origin-destination pairs under the Hub and Spoke model is given below: 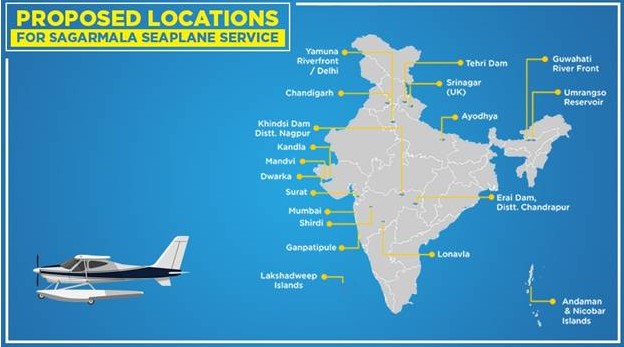 Reduction of logistics cost of EXIM is the vision of the SagarMala project. The objectives of the project are:

The project also seeks to lower the logistics cost of domestic cargo through optimized investment in infrastructure. The scheme also seeks to create up to 40 lakh new direct jobs and 60 lakh new indirect jobs.

The Sagarmala Development Company Limited (SDCL), established in 2016, develops and formulates projects borne out of the National Perspective Plan of the Sagarmala project. The SDCL is incorporated under the Companies Act, 2013.

The objectives of SDCL are:

To implement the Sagarmala project, a National Perspective Plan (NPP) for the entire coastline has been prepared to identify potential geographical regions to be called Coastal Economic Zones (CEZs). The living standards of the people living in the CEZs are expected to improve considerably by the Sagarmala project.

Questions related to the Sagarmala Project for UPSC

How many states are there in the Sagarmala project?

The Sagarmala Projects are being undertaken in the states of Gujarat, West Bengal, Odisha, Andhra Pradesh, Kerala, Goa, Karnataka, Maharashtra and Tamil Nadu.

How many projects have been identified under the Sagarmala Project?

For 2015-35, 574 projects have been identified under the Sagarmala Project.

What is the ultimate aim of the Sagarmala Project?

The Sagarmala project aims to transform the existing Ports into modern world-class Ports and integrate the development of the Ports, the Industrial clusters, and hinterland and efficient evacuation systems through road, rail, inland, and coastal waterways resulting in Ports becoming the drivers of economic activity in coastal areas.

How many projects have been completed under the Sagarmala Project?

121 projects have been completed as of 31st September 2019. 439 projects are under various kinds of implementation.