Make in India is a Government of India scheme launched by Prime Minister Narendra Modi in 2014 intended to boost the domestic manufacturing sector and also augment investment into the country. This article comprehensively covers details on objectives, schemes & initiatives under it, 25 focus sectors, advantages, challenges, & progress related to the Make in India Scheme.

The government wants to revive the lagging manufacturing sector and spur the growth of the economy. The GOI also intends to encourage businesses from abroad into investing in the country and also manufacture here, by improving the country’s ‘Ease of Doing Business’ index. The long-term vision is to gradually develop India into a global manufacturing hub, and also boost employment opportunities in the country.

The highlights of this scheme are mentioned in the table below:

Make in India is a very important government programme that has under its wing, many other sub-schemes, and programmes. Government schemes are important for the IAS Exam. Candidates can also download the notes PDF at the end of this article.

The Make in India logo is a lion. It is a lion’s silhouette filled with cogs. This symbolizes manufacturing, national pride, and strength.

Make In India – Focus on 25 Sectors

The Make in India website also has listed the 25 focus sectors and also furnished all relevant details about these sectors, and related government schemes, including the FDI policies, IPR, etc. The main sectors (27 sectors) covered under this campaign are given below:

Why Make in India?

There are multiple reasons why the government has chosen to focus on manufacturing. The key ones are discussed below:

The government has launched plans to create 5 industrial corridors. They are underway. These corridors are spread across the length and breadth of India, with a strategic focus on inclusive development which will augment industrialization and urbanization in a planned manner. The corridors are:

Several schemes were launched to support the Make in India programme. These schemes are discussed below:

This mission aims to skill 10 million in India annually in various sectors. Make in India to turn into a reality, there is a need to upskill the large human resource available. This is important because the percentage of formally skilled workforce in India is only 2% of the population.

The main idea behind this programme is to build an ecosystem that fosters the growth of startups, driving sustainable economic growth, and creating large-scale employment.

This aims to transform India into a knowledge-based and digitally empowered economy. To know more about Digital India, click on the linked page.

This mission aims to transform and rejuvenate Indian cities. The goal is to create 100 smart cities in India through several sub-initiatives.

AMRUT is the Atal Mission for Rejuvenation and Urban Transformation. It aims to build basic public amenities and make 500 cities in India more livable and inclusive.

This is a mission aimed at making India more cleaner and promoting basic sanitation and hygiene. For more information on Swachh Bharat Mission, click on the linked article.

This scheme aims at developing ports and promoting port-led development in the country. Read more on the Sagarmala Project in the linked article.

The ISA is an alliance of 121 countries, most of them being sunshine countries, which lie either completely or partly between the Tropic of Cancer and the Tropic of Capricorn. This is India’s initiative aimed at promoting research and development in solar technologies and formulating policies in that regard.

AGNII or Accelerating Growth of New India’s Innovation was launched to push the innovation ecosystem in the country by connecting people and assisting in commercializing innovations.

There are several targets aimed by the Make in India mission. They are:

There have been several milestones attributed to the Make in India scheme. Some of the prominent ones are listed below:

The Make in India campaign has had several positive developments for the country. Below are some more benefits that have been derived from this mission.

Even though the campaign has seen success in some quarters, there have been criticisms as well. There are also many challenges facing the country if she is to achieve the lofty targets set by the establishment. Some of the criticisms are laid out below.

Candidates should follow the latest developments in Current Affairs related to other government schemes for their UPSC 2020 preparation.

How Successful is Make in India?

The Make in India campaign has seen successes and drawbacks. A major success was reported from the mobile phone manufacturing sector, which saw 120 units being set up. This led to the replacement of the import of completely built units (CBUs) by domestically assembled and manufactured units. The country saved Rs 3 lakh crore of possible outflow from 2014. The import of mobile phones is expected to come down.

What are the Challenges of Make in India?

Some of the challenges in this mission are creating a healthy environment for business, lack of research and development, skills development and up-gradation, creating labour-intensive technology, increasing the competitiveness of goods manufactured in India, etc. 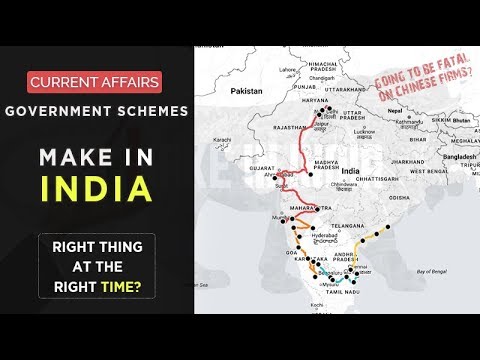