UDAN is a regional connectivity scheme spearheaded by the Government of India (GoI). The full form of UDAN is ‘Ude Desh ka Aam Nagarik’ and aims to develop smaller regional airports to allow common citizens easier access to aviation services.

The scheme is an important government scheme from the IAS Exam point of view. It is one of the new policies implemented since June 2016. The scheme is covered in the Geography syllabus as well as the Economy under the infrastructure and economic geography of the UPSC Syllabus. Candidates can watch the video explaining the UDAN scheme at the end of this article.

Objectives of the Regional Connectivity Scheme 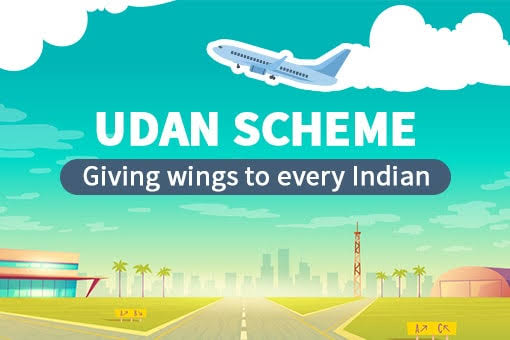 This scheme is a part of the National Civil Aviation Policy (NCAP) and is funded jointly by the GoI and the state governments. The following are its salient features:

Value Gap Funding is not provided to cargo airlines. All other terms and conditions remain the same as passenger airlines. The fares are graded based on distance and flight hours for both fixed-wing and rotary-wing services. The RCS subsidy is funded by a levy of Rs 5000 per flight on major routes. Flights regulated under this policy framework can be booked from the UDAN website and major travel portals by passengers.

Also, read about the Swadesh Darshan Scheme on the linked page.

UPSC aspirants should approach this topic for Geography and Economy from the following perspectives:

Aspirants can go through the following links for their preparation.

What is International UDAN Scheme?

Comment on the challenges faced in the implementation of the UDAN scheme.

Questions regarding infrastructure are a constant presence in both Prelims and Mains. Hence IAS aspirants should pay close attention to Current Affairs related to this topic. D) None of the above-given statements are false.