The International Atomic Energy Agency is an important United Nations agency working in the field of nuclear cooperation. International agencies are relevant for the UPSC exam, particularly, the UPSC Prelims.

In this article, you can read all about the IAEA, its functions, mandate, relations with India, all of which are important for the international relations segment of the UPSC syllabus.

In this article, you can read all about the International Atomic Energy Agency – IAEA for the Civil Services Exam.

The IAEA is the international centre for cooperation in the nuclear/atomic field. It is a UN agency.  It works with its member countries and many partners to promote peaceful uses of nuclear technologies. 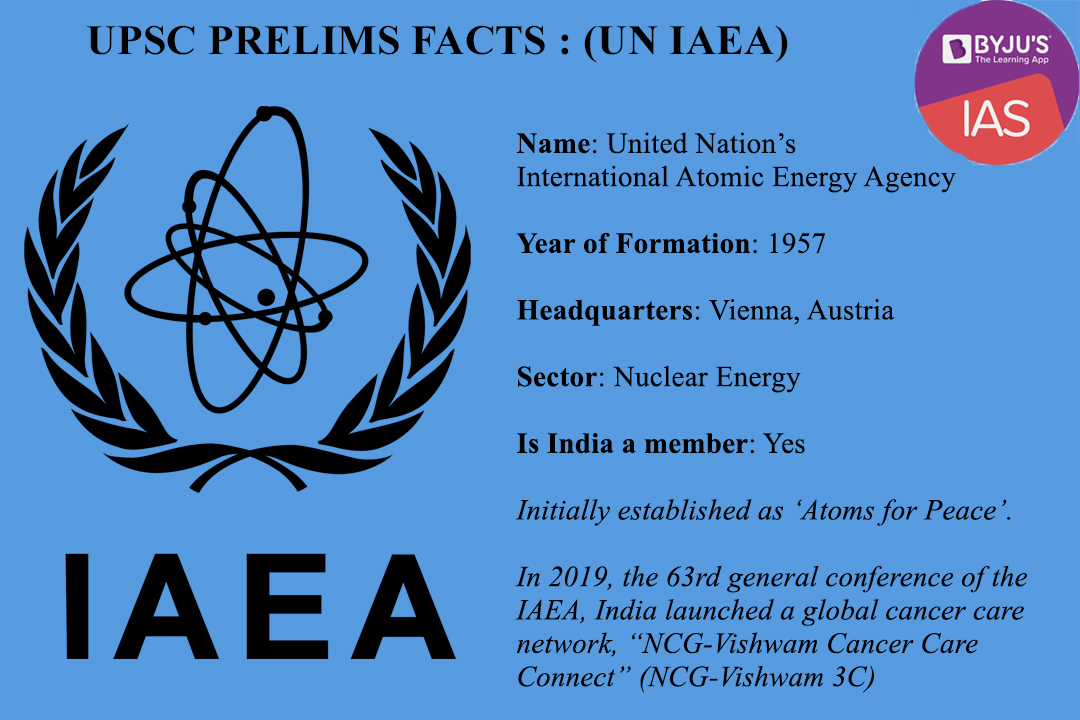 IAEA’s origins can be traced back to an address of the former US President Dwight Eisenhower to the General Assembly of the United Nations in 1953.

The functions of the IAEA are discussed below.

The IAEA’s three chief areas of work are:

**Iran has granted IAEA inspectors access to one of two sites where undeclared nuclear activity may have taken place in the early 2000s. Iran signed the nuclear deal in 2015 known as the Joint Comprehensive Plan of Action – JCPOA with the United States, Germany, France, Britain, China and Russia. The deal allows Iran only to keep a stockpile of 202.8 kilograms (447 pounds). However, as per the report of IAEA, Iran continues to increase its stockpile of enriched uranium in violation of limitations set in the deal. Details on the same can be checked on the Iran Sanction page linked here.

The IAEA has two policymaking bodies. They are:

64th General Conference of IAEA was held in Vienna from September 21st to 25th 2020.

The IAEA also has a Secretariat which comprises the organisation’s professional and general service staff. It is headed by the Director-General.

Is India a member of IAEA?

India is a founding member of the IAEA. As of 2019, India has put 26 reactors under IAEA safeguards. Also, India joined the IAEA Response and Assistance Network (RANET) in January 2020. RANET is a group of countries that provide assistance to reduce the consequences of nuclear or radiological emergencies.

Is the IAEA part of the United Nations?

The IAEA is an autonomous organisation within the United Nations system.

How is the IAEA funded?

The IAEA is funded by contributions from member states and donations from non-members.

Is IAEA a specialized agency of the UN?

No, it is considered to be a ‘related organization’ by the United Nations. It is not a specialised agency because of the political nature of the work done by it.