Economy is an important part of the UPSC syllabus and terms like monetary policy, fiscal policy, etc. are extremely important for the IAS exam. These have a big impact on the economy and are also frequently seen in the news. In this article, you can read about the changing dimensions of India’s monetary policy.

Monetary policy is adopted by the monetary authority of a country that controls either the interest rate payable on very short-term borrowing or the money supply. The policy often targets inflation or interest rate to ensure price stability and generate trust in the currency. For more details regarding the Monetary Policy visit the linked article.

What is Monetary policy? Monetary policy refers to the use of instruments under the control of the central bank to regulate the availability, cost and use of money and credit.

What are the goals?

Instruments Cash Reserve Ratio (CRR) The share of net demand and time liabilities (deposits) that banks must maintain as cash balance with the Reserve Bank.

Statutory Liquidity Ratio (SLR) The share of net demand and time liabilities (deposits) that banks must maintain in safe and liquid assets, such as, government securities, cash and gold. Changes in SLR often influence the availability of resources in the banking system for lending to the private sector.

Liquidity Adjustment Facility (LAF) Consists of overnight and term repo/reverse repo auctions. Progressively, the Reserve Bank has increased the proportion of liquidity injected in the LAF through term-repos.

Term Repos Since October 2013, the Reserve Bank has introduced term repos, to inject liquidity over a period that is longer than overnight. The aim of term repo is to help develop inter-bank money market, which in turn can set market based benchmarks for pricing of loans and deposits, and through that improve transmission of monetary policy.

Marginal Standing Facility (MSF) A facility under which scheduled commercial banks can borrow additional amount of overnight money from the Reserve Bank by dipping into their SLR portfolio up to a limit (currently two per cent of their net demand and time liabilities deposits) at a penal rate of interest (currently 100 basis points above the repo rate). This provides a safety valve against unanticipated liquidity shocks to the banking system. MSF rate and reverse repo rate determine the corridor for the daily movement in short term money market interest rates.

Open Market Operations (OMOs) These include both, outright purchase/sale of government securities (for injection/absorption of liquidity)

Bank Rate It is the rate at which the Reserve Bank is ready to buy or rediscount bills of exchange or other commercial papers. This rate has been aligned to the MSF rate and, therefore, changes automatically as and when the MSF rate changes alongside policy repo rate changes.

Market Stabilisation Scheme (MSS) This instrument for monetary management was introduced in 2004. Surplus liquidity of a more enduring nature arising from large capital inflows is absorbed through sale of short-dated government securities and treasury bills. The mobilised cash is held in a separate government account with the Reserve Bank. The instrument thus has features of both, SLR and CRR.

For more information about the Monetary Policy Committee aspirants can visit the linked article.

Proposed Composition It will be a six-member panel, which will include three nominees of the government and three members of the Reserve Bank including the Governor Each member shall have one vote and in case of a tie, the Governor shall have a casting vote. Please note that the governor does not have a veto. 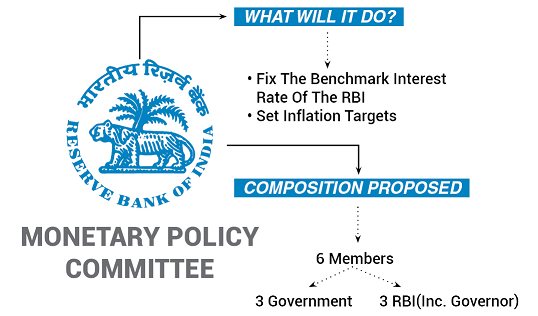 Members of the MPC will be appointed for a period of four years and shall not be eligible for reappointment. RBI will every six months publish Monetary Policy Report explaining the sources of inflation and the forecasts of inflation for the period between six to 18 months. If RBI fails to meet the inflation target, it shall in the report give reasons for failure, remedial actions as well as estimated time within which the inflation target shall be achieved. With the introduction of the monetary policy committee, the RBI will follow a system similar to the one followed by most global central banks.

Inflation targeting is a central banking policy that aims to meet the preset targets for the annual rate of inflation What were Urijit Patel committee’s recommendations? The Reserve Bank of India (RBI) had constituted an Expert Committee to Revise and Strengthen the Monetary Policy Framework under the Chairmanship of Dr. UrjitR.Patel. The committee submitted its report in January 2014.

Important recommendations made were:

Criticism for Inflation Targeting Inflation target reduces “flexibility” As Donald Kohn, noted American economist stated “Placing any number on an inflation objective – however much it would be surrounded with caveats – has the potential to constrain policy in some circumstances in which it would not be desirable to do so.”

Along with the above developments, it is imperative that our human wealth must be empowered with the knowledge and the tools required for them to derive the need of being a part of the system. This can be achieved through financial inclusion and a sound fiscal policy.

Nachiket Mor Committee has made recommendations in this regard which can be looked upon:

Financial inclusion will enable many of our growth objectives to be fulfilled without an extra push. Equitable Growth will then be a simultaneous process, which , the country ultimately aims to achieve.

Why monetary policy depends on the degree of “financial inclusion,”?

The greater degree of financial inclusion empowers the monetary policy to extend its reach to the needy and support policymakers to make better predictions for likely situations like inflation. The Reserve Bank of India has recently announced guidelines for ‘Priority Sector Lending Certificates’ that aim to enable banks to achieve the priority sector lending targets by the purchase of these instruments in the event of shortfall and at the same time incentivize the surplus banks; thereby enhancing lending to the categories under priority sector, giving support to the financial inclusion goal, thereby facilitating the aims of India’s Monetary Policy. Fiscal Policy involves changing government spending and taxation. It involves a shift in the government’s budget position. e.g. Expansionary fiscal policy involves tax cuts, higher government spending and a bigger budget deficit.

Fiscal Policy components of government spending and taxation. For example, for a contractionary fiscal policy, it is important to increase taxation or reduce government spending. This will reduce the aggregate demand in the economy, in turn reducing inflation. This is also the ultimate aim of monetary policy. Thus, monetary policy needs the support of other tools to effectively achieve its goal.

How to approach for civil services exam:

GS2: Governance – Policies of the government

Practice Question: Looking at the current developments, throw light on the effect of changing interest rates for the common citizen of the country. Discuss the role of commercial banking sector and the government in strengthening the monetary policy framework.

Get information about the Monetary and Fiscal Policies at the linked article.

This concept of Monetary Policy and its changing dimension is important from the IAS exam perspective. Candidates can also get the detailed UPSC Syllabus at the linked article start their preparation accordingly.