The Gangotri glacier is an important topic for both the geography and environment & ecology sections of the UPSC exam. It is the source of India’s national river, the Ganga. Hence, it assumes much importance. In this article, you can read all about the Gangotri glacier and also about its glacial retreat and its consequences.

Read more about India’s National River, the River Ganga in the linked article.

The Gangotri Glacier is one of the largest glaciers in the Himalayas and is one of the primary sources of the sacred river Ganga.

Read more on glaciers in the linked article.

A study conducted by scientists at the Wadia Institute of Himalayan Geology (WIHG) in Dehradun revealed that black carbon deposits have been found on the Himalayan glaciers for the first time. This was based on data collected from two observatories with aerosol monitors that were set up near Gangotri glacier in 2016. The presence of black carbon can hasten glacier melting and this has serious implications for the people living downstream and the larger population as well because of the dependency on the Himalayan rivers in the northern states.

After greenhouse gases, black carbon is the second major cause for glacier melting.

Why are glaciers melting?

In short, melting of Himalayan glaciers can have the following adverse consequences:

Rate of Retreat of Gangotri Glacier

The following image gives the rate of glacier retreat of the Gangotri glacier. 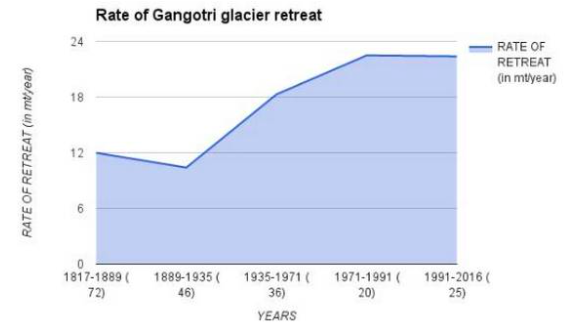 The next image shows the decreasing volumes of water discharged into the Bhagirathi river during summers. It is important to mitigate the impacts of climate change and check the retreat of the Himalayan glaciers since the consequences of glacial retreat are far too undesirable for people and the government to ignore, both in the short and long term. Addressing this issue, however, is not in a single country’s hands and there is a need to collaborate with other Himalayan countries and come up with a joint action plan to slow down, and if possible reverse the glacial retreat. This will ensure water and hence food security, preservation of flora and fauna in the glacial regions, and energy security for the people.