The Gaur, also known as the Indian Bison, is among the largest species of wild cattle native to South and Southeast.

This article will give details about the Gaur within the context of the IAS Exam.

Characteristics of the Gaur

The gaur is a bovid with a strong and massive build with a convex ridge on the forehead. It juts out anteriorly causing a deep hollow profile on the upper part of the head. It has large ears and a prominent ridge along its back. The adult male is dark brown and changes to black when it gets older. The hair is short, fine and glossy with narrow and pointed hooves,

Gaurs are found in evergreen forests or semi-evergreen and deciduous forests. A typical gaur habitat consists of large, almost undisturbed forest tracts, hilly terrain, availability of water and a large presence of forage such as bamboo, shrubs and trees.

Due to its immense size the gaur has few natural predators. The exceptions are tigers, crocodiles and humans. It’s difficult to take down a fully grown gaur hence predators go for either sick animals or young calves.

Further characteristics of the Gaur is discussed in the table below:

Characteristics of the Gaur 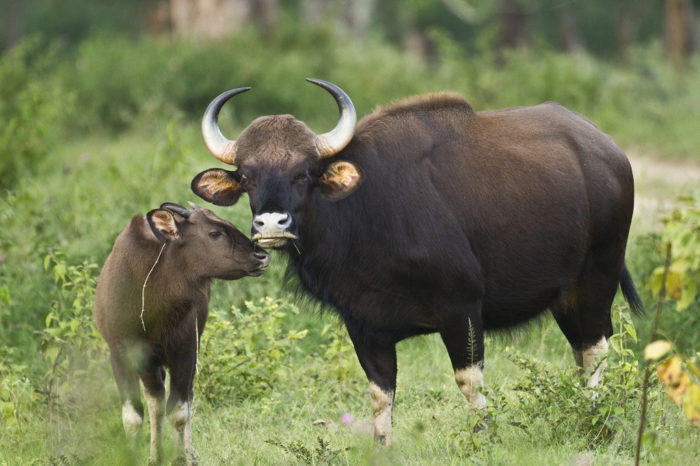 Behaviour and Feeding Habits of the Gaur

In certain areas affected by human habitation, gaurs are nocturnal but in other places they are diurnal. During the dry season they gather and remain in small areas until the arrival of the monsoon.

Herds of Gaur are led by an old adult, while adult males are solitary. They come into contact with females during the breeding season when unattached males wander widely in search of receptive mates. Size is the factor that determines who becomes dominant

The diet of gaurs consist of a variety of plants with a preference for upper parts of plants such as leaf blades, stems, seeds and flowers of  grass species.

Conservation status of the Gaur

The Gaur has been categorised as vulnerable on the IUCN Red List since 1986. The global population has been estimated to stand at 21,000 individuals by 2016. There has been a remarkable decline of about 70% in the last few decades. It is regionally extinct in Sri Lanka and possibly in Bangladesh.

The gaur has been thriving in protected areas.

The Gaur population in India was estimated to be at 12000-22000 in the mid-1990s. They are primarily found in hilly regions of South India like Wayanad, Nagarhole, Mudumalai and Bandipur. There is a thriving population of about 2000 individuals in the Nagarahole and Bandipur National Parks and about 1000 in the Tadoba Andhari Tiger Project.

An estimation exercise carried out in the Nilgiris Forest division in 2020 found about 2000 individuals.

Gaurs are especially threatened due to poaching along with opportunistic hunting. They are sought after for their meat, leather and trophies.

To further help the remaining Gaur population the cryoconservation of genetic resources has been put into place.

A cloned gaur was born in 2001 in Iowa, USA. But the calf developed complications due to dysentry and died as a result. But the reason was not due to cloning. Hence, such an option is also under due consideration.

What is the difference between bison and Gaur?

Is a gaur bigger than a bison?

According to wild life experts, Gaur is the largest of all wild cattles, bigger even than Asian wild Water Buffalo and American Bison.