The Indian Penal Code is the official criminal code of the Republic of India. It is a complete code intended to cover all aspects of criminal law.

It came into force in 1862 in all British Presidencies, although it did not apply to the Princely states, which had their own courts and legal systems.

To know more about other Legislations in British India, visit the linked article.

History of the Indian Penal Code

The first draft of the Indian Penal Code was prepared by the First Law Commission, chaired by Thomas Babington Macaulay. The draft was based on the simple codification of the law of England, while at the same time borrowing elements from the Napoleanic Code and Louisiana Civil Code of 1825.

The first draft of the Code was presented before the Governor-General in council in the year 1837, but subsequent revisions and amendments took two more decades. The complete drafting of the code was done in 1850 and presented to the Legislative Council in 1856. It was delayed being placed on the statute book of British India due to the Indian Revolt of 1857.

The code came into force on January 1st, 1860 after undergoing many revisions and amendments by Barnes Peacock who would go on to serve as the first Chief Justice of the Calcutta High Court.

Before the advent of the British, the penal law prevailing in India, for the most part, was the Muhammedan law. For the first few years of its administration, the East India Company did not interfere with the criminal law of the country and although in 1772, during the administration of Warren Hastings, the Company for the first time interfered, and henceforth till 1861, from time to time, the British Government did alter the Muhammedan law, yet up to 1862, when the Indian Penal Code came into operation, the Muhammedan law was undoubtedly the basis of the criminal law excepting in the presidency towns. The epoch of the administration of Muslim criminal law in India extended for a considerable period and has even supplied many terms for the vocabulary of Indian law.

Structure of the Indian Penal Code

The IPC in its various sections defines specific crimes and provides punishment for them. It is sub-divided into 23 chapters that comprise of 511 sections. The basic outline of the code is given in the table below:

Crimes against the Human Body

The chapter deals with all kinds of offences which can be committed against the human body, from the very lowest degree i.e. simple hurt or assault to the gravest ones which include murder, kidnapping and rape.

These crimes are defined and punished under Chapter XVII and range from Section 378 which defines theft, to Section 462 which prescribes punishment for the offence of breaking upon an entrusted property. The offences that are dealt with under this chapter include, among others, theft, extortion, robbery, dacoity, cheating and forgery.

The definitions and punishment for this category of offences are provided in Chapter VIII which ranges from Section 141 to 160. This chapter lays down the acts which are considered to be criminal in nature because they disturb and destroy public tranquillity and order.  This chapter includes offences like being a member of an unlawful assembly, rioting and affray.

Offences against the State

Chapter VI, which deals with offences of this nature, and includes Sections 121 to 130 are some of the most rigorous penal provisions of the entire code. This includes the offence of waging war against the state under Section 121 and the much-debated, criticised, and abused offence of Sedition under Section 124A. The offence defined under this Section has been much maligned as it was used by the British to prosecute many freedom fighters; it has also been used post-independence to silence critics of the government and continues to date which is why many experts advocate repealing the same.

Sections 76-106 (Chapter IV) embody the general exceptions which are exceptional circumstances where the offender can escape criminal liability. A basic example in this context is the Right of Private Defence (Section 96-106). Other concepts that are elaborated upon in this chapter include Insanity, Necessity, Consent, and acts of children below a certain age.

Aspirants can refer to the links below to ace the GS-II paper of the IAS exam:

Debated Provisions of the IPC

The IPC has been successful by and large in its attempt to prosecute and punish individuals who commit the crimes that are defined in this Code, but like Sedition there have been certain other provisions that have invited scrutiny time and again. Some of these provisions are as follows:

This Section, among other things, punished consensual sexual acts between consenting adults belonging to the same sex. With the advent of time, several voices advocated for the decriminalisation of this part which punishes homosexuality. The Supreme Court, finally in the case of Navtej Johar, obliged and decriminalised the portion of this Section which punished consensual acts of this nature.

This Section prescribed punishment of up to one year for attempting suicide. There is a longstanding recommendation of the Law Commission to decriminalise attempting suicide by dropping Section 309 from the statute books. But the amendment to this effect has not been carried, albeit, the use of the provision has minimized, by the coming into force of the Mental Healthcare Act, 2017.

As per the non-obstante clause contained in Section 115(1) of the Mental Healthcare Act, 2017, there is the presumption of severe stress on a person who attempted suicide and such person is not to be punished under Section 309 IPC.

But the reports about the use of Section 309 IPC are not unknown and continue to be reported from almost all the parts of the country. As such, it is the need of the hour that the police authorities should be sanitized about the issue.

This Section, which criminalised and prescribed punishment, was criticised for treating a woman as the private property of her husband and imposing moral principles on married couples. This Section was finally struck down by the Supreme Court in September 2018 while disposing of the case of Joseph Shine v. Union of India. Watch a video lecture on the adultery judgement below: 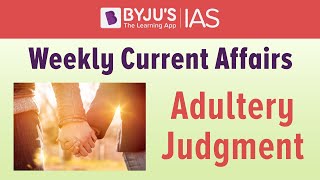 The Code also provides for imposing the death penalty in certain offences like murder, rape, and waging war against the government. Several human rights groups call for the abolition of the death penalty citing data to suggest that the imposition of this punishment, in addition to being arbitrary, is also against the very human rights of the offender.

IPC as a statute has survived and flourished over the last 160 years, which speaks volumes about its effectiveness as a penal code of high stature. However, over these years it has not been able to shed away some of its provisions that reek of colonialism e.g. sedition. The Malimath Committee report while advocating criminal justice reforms has provided the Parliament with an opportunity to revamp the Code and other criminal laws. It has been 17 years since the submission of the report and no concrete steps have been taken in this respect. It is about time that the legislature steps in to make the Code more in sync with modern times than with the times of British colonialism. It does not reflect well on the legislature when the apex court intervenes and strikes off laws because it is the job of the legislature to do so in the first place.

Even though the IPC has been haphazardly amended more than 75 times, no comprehensive revision has been undertaken despite the 42nd report of the law commission in 1971 recommending it — the amendment bills of 1971 and 1978 lapsed due to the dissolution of the Lok Sabha. As such it has undergone many amendments that have been ad hoc and reactive.

The nature of the Indian Penal Code has been highlighted as that one of ‘Master and Servant’, with some of the provisions having no place in Independent India. Some of the sections that need reform and review are as follows:

Q 1. Who made the Indian Penal Code?

Ans. The Indian Penal Code was drafted by the first Law Commission which was chaired by Thomas Babington Macaulay. It was drafted in 1834 and submitted to the Council of Governor-General of India in the year 1835.

Q 2. Who is the Father of Indian Modern Legal Education?

Q 3. What is the need for Indian Penal Code?

Ans. The Indian Penal Code is the main criminal code for the country. It includes all the criminal offences including crimes related to human body, property, conspiracy, crimes against the state or Public Tranquillity, etc. Anyone found guilty of a crime is punishable under the IPC.

Ans. Penal code of a country defines or mentions crimes and offences which are punishable by law. It consists of all the laws that are related to crime and punishment.

Q 5. Can amendments be made in the Indian Penal Code?

Ans. Yes, amendments have been made multiple times in the Indian Penal Code after it was drafted.

Q 6. IPC comprises how many sections?

Ans. The Indian Penal Code is sub-divided into 23 chapters that comprise 511 sections.