Jainism is a very important topic for the UPSC history, and art and culture segments. It is an important ancient religion that originated in India. In this article, you will find all the important facts and doctrines of Jainism, about the life of Mahavira, the various sects of Jainism and other vital details for the IAS exam and other government exams.

Vardhamana Mahavira was born in 599 BCE in a village near Vaishali (Capital of Videha). He is considered to be a contemporary of the Buddha. His father was the head of a famous Kshatriya clan and his mother, a Lichchhavi princess. They were connected with the royal family of Magadha; high connections made it easy for Mahavira to approach princes and nobles in the course of his mission.

In the beginning, Mahavira led the life of a householder but in search of the truth, he abandoned the world at the age of 30 and became an ascetic. He wandered for 12 years practising severe austerities, fasting and meditation. At the age of 42, he attained perfect/infinite knowledge (kevalajnana), on the banks of the Rijupalika river. He propagated his religion for 30 years. Through kevalajnana, he conquered misery and happiness. Because of this conquest, he is known as ‘Mahavira’ or The Great Hero or ‘Jina’ i.e, the conqueror and his followers as ‘Jainas’. He passed away and became a Siddha (fully liberated) at the age of 72 in 527 BCE at Pavapuri near Patna.

The core of Jaina doctrine is expressed in the principles given in the image below: 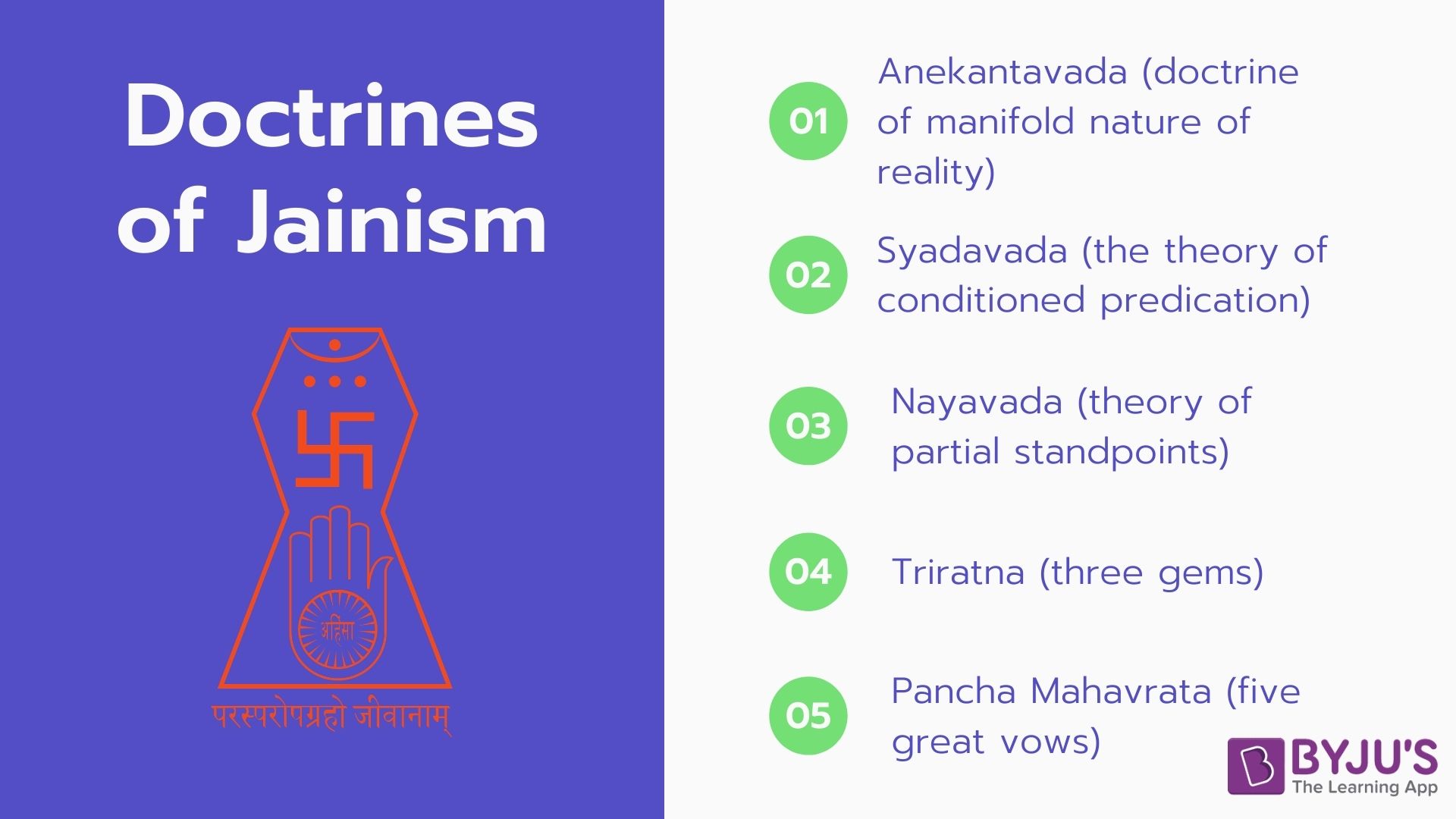 Anekantavada – According to this doctrine, the objects have infinite modes of existence and qualities so they cannot be completely grasped in all aspects and manifestations by finite human perception. Only the Kevalins- the omniscient beings can comprehend objects in all aspects and manifestations; others are capable of only partial knowledge. Anekantavada is literally the doctrine of “non- onesidedness” or “manifoldness”, it is often translated as “non-absolutism”.

Syadavada– According to this doctrine, all judgements are conditional, holding good only in certain conditions, circumstances, or senses. As reality is complex no single proposition can express the nature of reality fully. Thus the term “syat” (meaning – maybe) should be prefixed before each proposition giving it a conditional point of view and thus removing any dogmatism.

Nayavada – Nayavada is the theory of partial standpoints or viewpoints. The doctrine of Nayavada signifies the system of describing reality from different points of view. “Naya” can be understood as partially true statements but they cannot lay claim to absolute validity. It can also be defined as a particular opinion framed with a viewpoint, a viewpoint which does not rule out other viewpoints and is, therefore, an expression of a partial truth about an object.

Triratna – The three jewels of Jaina ethics must be followed to achieve the liberation of the soul. These are:

For a common man, to observe all the above five vows are difficult and they can practise them as far as their condition permits. The vows or “vratas” partially observed are called “Anuvratas” i.e, small or partial vow.

Both the religions share so many similarities from outside, yet they are different upon deeper investigation into their details and teachings.

Under this section, we will talk about the spread and influence of Jainism.

In order to spread the teachings of Jainism, Mahavira organized an order of his followers which admitted both men and women. Jainism gradually spread to western India where the Brahmanical religion was weak. Jainas adopted the Prakrit language of the masses to preach their doctrines and discarded the Sanskrit language which was patronized by the Brahmanas. The spread of Jainism in Karnataka is attributed to Chandragupta Maurya who became a Jaina and gave up his throne and spent the last years of his life in Karnataka as a Jaina ascetic. The second cause of the spread of Jainism in Southern India is said to be the great famine that took place in Magadha, 200 years after the death of Mahavira. The famine lasted for 12 years and in order to protect themselves many Jainas went to the south under the leadership of Bhadrabahu, but the rest stayed back in Magadha under the leadership of Sthulabahu. When the immigrants came back to Magadha, they developed differences with the local Jainas. The southerners began to be called Digambaras and the Magadhas as Shvetambaras.

Jainism spread to Kalinga in Odisha in the 4th century BCE and in the first century it enjoyed the patronage of the Kalinga King, Kharavela who had defeated the princes of Andhra & Magadha. In the 2nd and 1st centuries BCE, it reached the southern districts of Tamil Nadu. In later centuries, Jainism penetrated Malwa, Gujarat, and Rajasthan and even now, these areas have a good number of Jainas, mainly engaged in trade and commerce. Although Jainism didn’t win as much state patronage as Buddhism and did not spread very fast in early times, it still retains its hold in the areas where it spread. On the other hand, Buddhism has practically disappeared from the Indian subcontinent.

Read more about the differences between Jainism and Buddhism here.

The different schools of Jainism are discussed below.

The division of the Jaina religion into two sects (Digambara & Shvetambara) was only the beginning of splitting the religious order into various sub-sects. Each of the two sects got divided into different major and minor sub-sects according to the differences in acknowledging or interpreting the religious texts and in the observance of religious practices.

Who was the 1st Tirthankara of Jainism?

Rishabhanatha was the first of the 24 Tirthankaras of Jainism

What is a main idea of Jainism?

Jainism teaches that, the way to liberation and bliss is to live lives of harmlessness and renunciation. The essence of Jainism is concern for the welfare of all living beings in the universe and for the health of the universe itself.