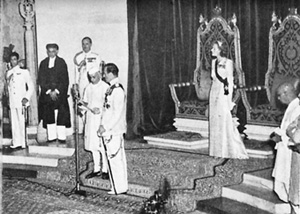 Nehru being sworn in as India’s Prime Minister

The Indian Independence Act, 1947 received the royal assent and entered into force on 18th July 1947. This Act put into action the Mountbatten Plan for the independence and partition of India. Read on for more on this Act for IAS exam.