Mains: Analysis of Russia’s move to cut the supply of gas to European countries and the steps taken by the EU to reduce their dependence on Russia for gas. 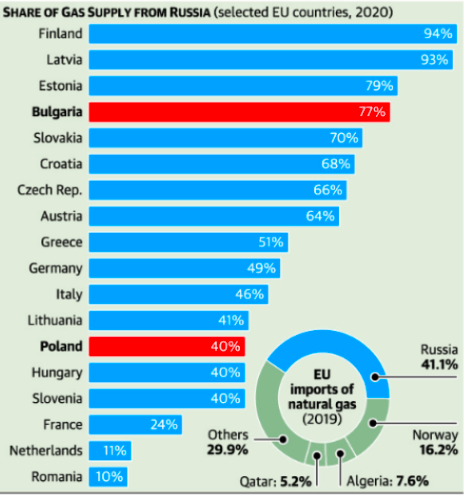 Impact of suspension of gas supplies

Response from the European Union

Feasibility of shifting from Russian natural gas to LNG

[su_box title=”Nut Graf” box_color=”#7960a0″ title_color=”#ffffff”]
Russia’s unilateral move to suspend its gas supplies to Europe can cause severe disruptions in supplies which can fuel inflation, damage economic activity and even lead to a major recession in the continent. Hence, the EU must immediately look for ways to reduce its reliance on Russia for gas.
[/su_box]

1. The demand for a revenue share in privatised airports

Mains: Critical analysis of the Tamil Nadu government’s demand for a revenue share in privatised airports.

The Tamil Nadu administration has claimed that state governments should get a share in the revenue whenever the Central government privatises an airport.

Arguments for the proposals

Arguments against the proposals

[su_box title=”Nut Graf” box_color=”#7960a0″ title_color=”#ffffff”]
The Tamil Nadu government’s move to seek a share in the revenue from privatised airports is gaining support from various other states and is further intensifying the existing Centre-state tussle over economic issues.[/su_box]

Prelims: Article 21 of the Indian Constitution

Know more about capital punishment in the link.

Relook at the constitutional validity of the death penalty:

The Supreme Court looking into the challenge of the Irfan vs State of Madhya Pradesh case offers an opportunity to radically alter India’s death penalty jurisprudence. While trying to fill the gaps in the landmark Bachan Singh case the court should also consider relooking at the constitutional validity of the death penalty.

1. Are freebies affecting the economic growth of India?

Mains: Freebie culture – Arguments for and against

For detailed information on this topic refer to the following article:

Which of the statements given above is/are correct? (Level: Medium)