The Quadrilateral Security Dialogue (QSD) or QUAD Group is an informal strategic forum comprising India, Japan, Australia and the United States of America. It is a grouping frequently seen in the news nowadays because of the current geopolitical situation in the world. Hence, it is an important topic for the UPSC exam.

The Prime Minister addressed the first summit of the leaders of the QUAD (Quadrilateral Framework). The meeting was hosted by the USA on a virtual platform.

The QUAD Group is an informal strategic dialogue with four members, namely, India, Japan, Australia and the US. The shared objective is to ensure and sustain an open, free and prosperous Indo-Pacific region. 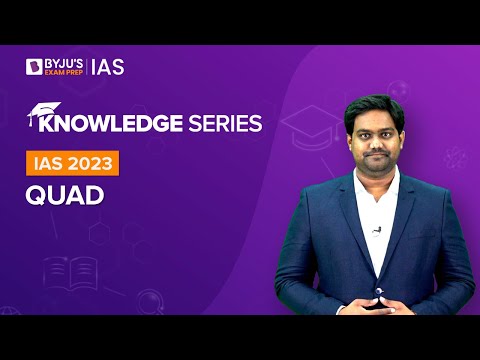 The idea behind the QUAD Group is to keep the strategic and significant sea routes in the Indo-Pacific free of any influence (read Chinese influence).

Analysts point out that viewing the QUAD solely as a bureaucratic-level foreign-ministry-led dialogue that meets occasionally might not be correct given the growing military engagements and the matrix of trilateral and bilateral relationships among the members of the QUAD Group.

There are some challenges also facing the QUAD Group. While the member countries have recently come together sensing an expansionist China, they themselves have different aspirations and interests. It would be interesting to see how these varied disparities play out and the countries narrow their differences. Also, considering the economic might of China, none of the QUAD countries can afford to really take a vivid anti-China stance.

The QUAD members will have to chart out a clearer vision for the grouping. A “free and open Indo-Pacific” should not merely be a slogan. The QUAD Group should work out a working regional consultation mechanism and also work more closely with the ASEAN.

Is the QUAD an Asian NATO?

As per the United States Deputy Secretary of State, the QUAD could be an alliance of sort based on shared security concerns instead of a post-Cold War alliance similar to that of NATO.

What is China’s take on QUAD?