2. No tally of govt. buildings to be made accessible

Review meeting of the Accessible India Campaign by Social Justice and Empowerment Minister.

The Accessible India Campaign was launched in December 2015, to make public offices, transport, and websites accessible to persons with disabilities (PwD) by March 2020.

For more information on this issue: Check CNA dated 14 Dec 2019

1. ‘People may criticise us, but environment is top priority for Bhutan’

1. Cauvery delta to be declared a protected agriculture zone

Hydrocarbon resources in the region:

Amendment of the Environment Impact Assessment Notification of 2006:

The Ministry of Science and Technology’s response to a query in the Lok Sabha.

1. Bodo accord- Searching for a solution

Who are the Bodos?

British Rule and loss of economic and political freedom

Socio-economic grievances of the Bodos

In 2008, the group submitted its demand of a separate Bodoland, and the talks didn’t go far. The NDFB suffered a major split when founder chairman Ranjan Daimary was accused of being involved in serial blasts. In the immediate aftermath, Ranjan Daimary was expelled from the party.

What is the Bodoland Territorial Council (BTC)?

What was agreed on territory? 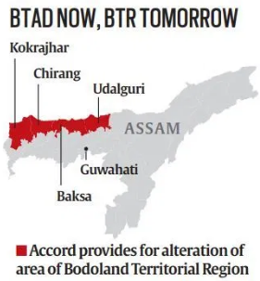 How is the 2020 Accord different from the earlier Accords?

Advantages of the Peace deal

Other extremist organizations not part of the Peace deal

4. Agro units of cooperative sector to come up in all Rajasthan districts

1. Declaration of Basic Principles of Justice for Victims of Crime and Abuse of Power