The International Co-operation Review Group (ICRG) of the Financial Action Task Force (FATF) recommended that Pakistan be retained on the ‘Grey List’, given its failure to completely implement the 27-point action plan to check terror financing.

For background, refer to the article “Black and Grey” covered in the Editorial segment in the 27th January 2020 Comprehensive News Analysis.

President Donald Trump is set to make his maiden visit to India on February 24-25, 2020. With no headway in the talks for a trade deal, there are expectations that a few big-ticket defence deals will be announced. 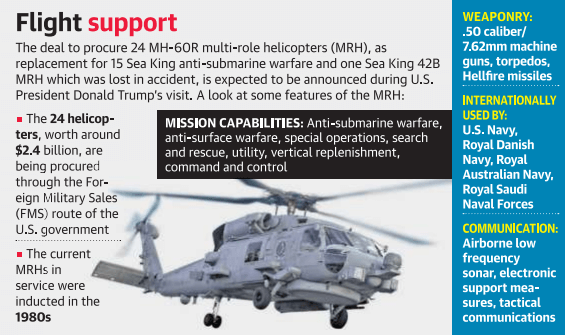 Several big-ticket deals in the pipeline:

However, these are at various stages of procurement.

1. Sanjay Kothari tipped to be CVC; Bimal Julka is CIC

Read about the Central Information Commission.

An Assam-based insurgent group of Karbis, which signed a ceasefire agreement with the Centre, has demanded that the Bodos in the hill areas not be given the Scheduled Tribe status as it will affect the identity of the Karbis.

“Bodo Accord” has been comprehensively covered in the 10th February 2020 Comprehensive News Analysis. Click here to read.

A study on school students has revealed that one in every three adolescents exposed to the Internet are victims of cyberbullying and other forms of online abuse and nearly half of the users display some level of addiction.

Consequences of the classification:

The recent designation by the USTR would entail an adverse impact on India’s interest in many respects.

The WTO Agreement on Agriculture (AoA):

1. Powering the health-care engine with innovation

The article analyzes the performance of the Ayushman Bharat scheme and suggests the way forward for the scheme.

Expanding the supply side:

Lack of incentives to adopt innovations:

Recognizing the role of start-ups:

For more information on this topic refer:

The article calls for the Elections to urban local bodies to take place on non-party lines and calls for direct elections of the mayors.

Total foodgrain production is projected to scale an all-time high of almost 292 million tonnes in 2019-20, propelled by record production of both rice and wheat, according to the Agriculture Ministry’s second advance estimates. 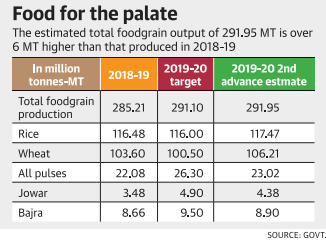 2. China’s envoy thanks India for support during coronavirus crisis

China appreciates the support and solidarity that India has extended in its fight against the novel coronavirus, Beijing’s envoy has said.

Read more on the Wuhan Coronavirus.

With just 242.25 acres of land under industry in Jammu and Kashmir, the Union Territory administration is wooing investors by opening up a 6,000-acre land bank for setting up multiplexes, processing units, food parks, film production centres, schools, Information Technology parks and medical complexes.

Stating that J&K has a gross enrolment ratio of 30.9% in higher education, the administration has asked investors to explore the opportunities in the education and skills sector.

The Delhi High Court issued notice to the Centre on a plea by a specially-abled sportsperson who claimed discrimination by the government in rewarding Deaflympics athletes over Olympics and Para Olympics sportspersons.

As per Section 12(3) of the RTI Act 2005, the committee for selection of Chief Information Commissioner shall comprise of:

(i) The Prime Minister, who shall be the Chairperson of the committee;

(ii) The Leader of Opposition in the Lok Sabha; and

(iii) A Union Cabinet Minister to be nominated by the Prime Minister.

Bodos are the single largest community among the notified Scheduled Tribes in Assam. Part of the larger umbrella of Bodo-Kachari, the Bodos constitute about 5-6% of Assam’s population. Bodos traditionally practise Bathouism, which is the worshiping of forefathers, known as Obonglaoree. Bodo is listed in the Eighth Schedule of the Constitution. It is spoken in Assam, Arunachal Pradesh, Nagaland, Meghalaya, and West Bengal.

a. An annual traditional Buffalo Race held in coastal districts of Karnataka.
b. A popular bull taming sport held during Pongal typically practised in Tamil Nadu.
c. A traditional boat race conducted during the season of the harvest festival in Kerala.
d. Assam’s traditionally woven piece of cloth with a distinctive red border and floral motifs.

Kambala is a traditional slush track buffalo race that is held annually in coastal districts of Karnataka. The contest generally takes place between two pairs of buffaloes, each pair race in two separate wet rice field tracks, controlled by a whip-lashing farmer.