A deal has been signed between the U.S. and the Taliban in Doha that has set the stage for America to wind down the longest war in its history. The agreement provides a timetable for the withdrawal of US troops from Afghanistan by May 2021 and an intra-Afghan dialogue in March 2020.

This issue has been covered in 2nd March 2020 Comprehensive News Analysis. Click here to read.

1. Pension scheme fails to take off

Just over 34,000 people have signed up for the National Pension Scheme for Traders, Shopkeepers and Self-Employed Persons.

The Registrar General of India (RGI) has asked all States to “give highest importance, attention and time” to the Census and National Population Register (NPR) work as “the foundations of the statistics of the country” depend on them.

According to the Finance Ministry, comprehensive steps taken to curb fraud in public sector banks (PSBs) have resulted in a sharp decline in the amount involved, from Rs. 50,329 crore in 2013-14 to just Rs. 3,781 crore in the first three quarters of 2019-20.

The nationalised banks have recovered Rs. 3,08,370 crore over the last five financial years and the first three quarters of the current financial year.

1. Return to chaos in Afghanistan?

The U.S.-Taliban agreement signed in Doha.

Clauses of the deal:

Upper-hand to the Taliban:

A civil war in Afghanistan:

This could have ensured lasting peace and stability in Afghanistan.

According to a monthly survey, India’s manufacturing sector activity eased in February 2020 from a near eight-year high in January 2020 and business sentiment took a hit amid fears of the COVID-19 outbreak on exports and supply chains. PMI for India declined from 55.3 in January to 54.5 in February; the reading was at 52.7 in December.

Organisation for Economic Cooperation and Development (OECD) has lowered its India’s GDP growth forecast to 5.1% from the earlier projection of 6.2% for 2020 on concerns of the impact of the deadly COVID-19 on the domestic as well as the global economy.

Read more about Organisation for Economic Cooperation and Development (OECD).

Chabahar port will boost India’s access to Iran, the key gateway to the International North-South Transport Corridor that has sea, rail and road routes between India, Russia, Iran, Europe and Central Asia.

3. Standing Committees make up for fewer sittings of Parliament: Naidu

4. EC not for state funding of polls: Thakur tells LS

The Election Commission has informed the Government that it is not in favour of state funding of elections, Minister of State for Finance Anurag Thakur told the Lok Sabha.

The panel admitted that only partial funding may be possible.

The Sea being talked about is: 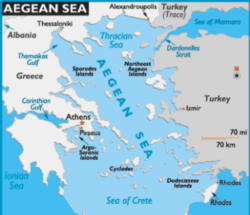 There are a total of 24 Department-Related Standing Committees (DRSCs), of which 8 are with Rajya Sabha and remaining 16 with Lok Sabha. The standing committee system was introduced in 1993 with the panels drawing members from all political parties. DRSCs perform three important functions: examine bills referred to them; select specific topics related to the ministries and examine implementation by the Government; and examine the budgetary outlays of the departments.

Chakmas and Hajongs came to India from the Chittagong Hill Tracts in Bangladesh (formerly East Pakistan), having lost their homes and land to the Kaptai dam project (Karnaphuli river) mid-1960s. They also faced religious persecution. Chakmas mostly follow Theravada Buddhism. Only 75 tribes have been identified as Particularly Vulnerable Tribal Groups (PVTGs) by the Ministry of Home Affairs, Chakma tribe is not one among them.

The OECD stands for the Organization for Economic Cooperation and Development. It’s an association of 35 nations in Europe, the Americas, and the Pacific. Its goal is to promote the economic welfare of its members. Organization for Economic Cooperation and Development (OECD) is funded by its member countries. National contributions are based on a formula that takes account of the size of each member’s economy. Countries may also make voluntary contributions to financially support outputs in the OECD program of work. Its Secretariat is in Paris, France. India is not a member of OECD. However, Brazil, China, India, Indonesia, Russia, and South Africa are seeking admission into OECD.