1. ‘FASTags will work as Aadhaar to track vehicles’

The government has announced that FASTags will be mandatory for all vehicles on all National Highways from December 1, 2019.

“One Nation-One FASTag conference” had been covered in 13th October 2019 PIB Summary and Analysis. Click Here to read.

How does FASTag work?

The Supreme Court has given the Centre and 25 States a month’s time to respond to a writ petition seeking a direction to establish Right to Information (RTI) web portals across all States to enable citizens, especially those living abroad, to file RTI applications online.

All the Public Authorities come under the RTI Act, making it one of the most powerful laws in the country.  To know more about the Right To Information Act, Click Here.

1. ‘Cataract major cause of blindness above 50’

The summary report of the National Blindness and Visual Impairment Survey India 2015-2019 has been released by the Union Health Minister Dr. Harsh at the 13th Conference of Central Council of Health and Family Welfare.

Findings of the survey:

National Programme for Control of Blindness and Visual Impairment (NPCB&VI):

NCERT’s first-ever pre-school curriculum states that children between the ages of three and six years should begin their educational journey in their own mother tongues, learn through play and not be subjected to tests of any kind.

1. Govt. yet to decide on exempting 2-wheelers from odd-even 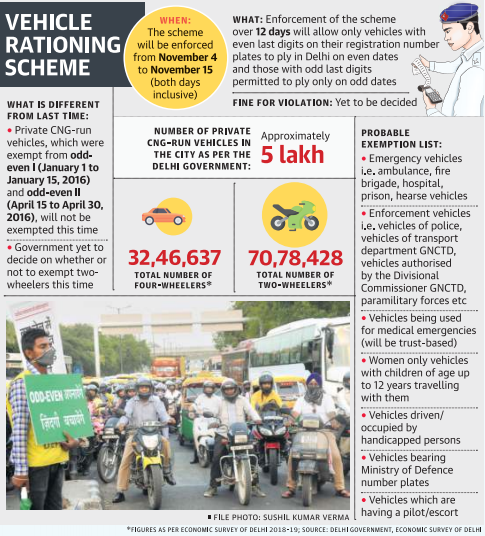 The government is currently engaged in multi-level discussions regarding the decision on exempting two-wheelers. Several departments, including Delhi Police, have been requested to share their views on the issue. 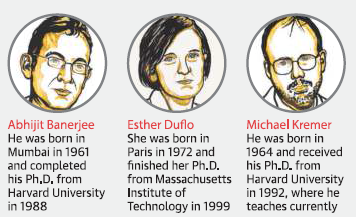 Why have Banerjee, Duflo, and Kremer won the Nobel Prize?

How does this approach work in practice?

“The lack of a grand universal answer might sound vaguely disappointing, but in fact it is exactly what a policy maker should want to know — not that there are a million ways that the poor are trapped but that there are a few key factors that create the trap, and that alleviating those particular problems could set them free and point them toward a virtuous cycle of increasing wealth and investment,” Banerjee and Duflo said in Poor Economics.

Breaking down the poverty problem and focussing on the smaller issues such as “how best to fix diarrhoea or dengue” yielded some very surprising results.

They then showed that these smaller questions could be best answered through carefully designed experiments among the people who are most affected. This thought process has resulted in what are called Randomised Control Trials (RCT)

And what is their “new experiment-based” approach?

So if one wanted to understand whether providing a mobile vaccination van and/or a sack of grains would incentivise villagers to vaccinate their kids, then under an RCT, village households would be divided into four groups.

Households would be chosen at random to ensure there was no bias, and that any difference in vaccination levels was essentially because of the “intervention”.

Group D is called the “control” group while others are called “treatment” groups.

Significance of such approach

Is there a flip side to RCTs?

1. Looking beyond the Rafale

What was the need of Rafale for India?

Countries that are operating Rafale

Where will they be deployed?

What should India look at?

The point to be noted is that there is a lot of difference between Defence Diplomacy and Security Diplomacy.

Why Security Diplomacy matters for China?

How has this helped Nepal?

1. ‘India’s Got Colour’ – celebrating diversity through shades of skin tones

Red notice is issued by the INTERPOL General Secretariat to seek the arrest or provisional arrest of wanted criminals, with the intention of extradition of the culprits. It is a request to locate and provisionally arrest an individual who is convicted in a criminal case. But just issue of red notice does not mean the person is guilty; he should be proven guilty by the court. It is issued by the General Secretariat at the request of a member country or an international tribunal based on a valid national arrest warrant. A Red Notice is not an International arrest warrant.[/su_spoiler]

a. It is a project of the Army’s Corps of Electronics and Mechanical Engineers (EME) connecting all its workshops to an integrated smart network with real-time data analytics capabilities.
b. It is a project to promote bee keeping under the Mission for Integrated Horticulture (MIDH).
c. It is a technological research and development centre of Kerala Police Department conceived as a cyber-centre of excellence in cyber security.
d. It is a project launched for promotion and development of handicrafts sector under National Handicraft Development Programme (NHDP).

The program code named ‘Project Beehive’ is a centralised and automated system based in Delhi under the army’s Electronics and Mechanical Engineers (EME) corps. It will be connected to each of the 2,000 workshops being run by the EME. It is aimed at integrating smart network with real-time data analytics capabilities.[/su_spoiler]