Water is a natural resource and it is a subject that comes under geography and science and technology in the UPSC syllabus.

Water is one of the most basic, one of the most used, one of the most exploited and perhaps equal in importance to the other natural resources essential for the survival of life. Since water has been in the news for several reasons both good and bad such as droughts, heavy rain causing floods, cleaning of r river Ganga, interlinking of rivers issue, river water disputes and much more, thus it is essential to go through the topic in detail analyzing every aspect of it.

In this part, we will be looking into the basics of water as a resource before moving ahead.

Hence, now we know and should understand that although water is a natural renewable resource, however still there is a shortage as the amount of water which is fit for use is very limited. Apart from this, pollution, indiscriminate use is also affecting its reach to all.

We just mentioned that water is a naturally occurring renewable resource. Water is recycled through the process known as Water Cycle. It is represented pictographically below: Through the picture above it is clear that water evaporates as water vapour, condenses to form clouds and then fall as rain/ snow(precipitation) and thus complete the water cycle.

Ocean Water movement can be divided into three namely,

What are the waves?

They are a movement of ocean water surface

What kind of movement?

Alternate rise and fall of water

What causes these waves?

They are caused by the action of winds blowing over the ocean surface. The height of the wave depends upon the strength of the wind

Thus on the basis of the above facts, we can define waves as the movement of ocean water on its surface as alternate rise and fall caused due to the action of the winds blowing over it.

It is important to understand here that wave is basically energy and not water that is moving. The water particles actually move in a circular fashion, while forming a wave-like feature, seems as if the water is moving ahead. The highest point that this water can reach is known as ‘Crest’ and the lowest is known as ‘Trough’. Due to the friction caused by the seafloor, the wave decreases while reaching the beach.

It is good to know that the steeper waves are generally the young waves and caused by the local winds. On the contrary, the steady waves travel from a faraway distance.

They are also the movement of ocean water

What kind of movement?

It is the rhythmic rise and fall of ocean water

How often does it happen?

What causes the tides?

The gravitational pull exerted by the Sun and the Moon

Thus now we can define tides as the rhythmic rise and fall of ocean water twice a day caused by the gravitational pull exerted by the celestial bodies the Sun and the Moon.

When the tide is in between islands, or bays, etc., it is known as ‘Tidal Currents’.

The different types of tides based on the position of the Sun, moon and earth are mentioned below:

What are the currents?

What causes the currents?

Some of the factors include Coriolis force, wind, gravity, salinity

The fishing grounds in the world are formed where the warm and cold ocean currents meet. This is because their mixing generates oxygen which enables the growth of planktons. Planktons are the primary food for fish and hence these areas become the best fishing grounds of the world.

Important ocean currents are as follows: 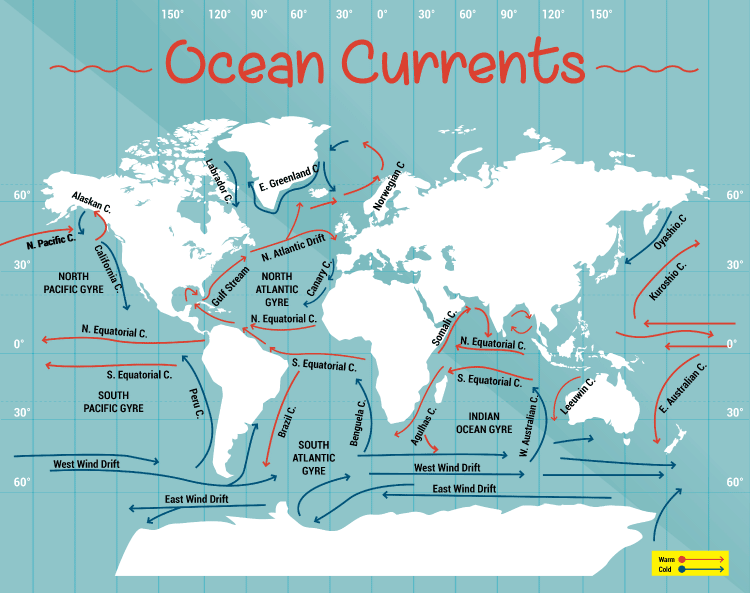 With this basic understanding, let us move ahead with the water-related issues concerning society today.

Thus, the issue of water in present-day has to be looked into from a holistic point of view. There is a need to understand that it affects our society geographically, socially, economically and even at individual levels. Clean water is a basic necessity that is important for the holistic development of the society and its members.

The need of the hour is cooperative participation by the government, citizens and civil society to come up with proper policy designs and implementation beginning at the root cause of the problem. Public-Private participation, panchayats, open public platforms can contribute to a large extent to purify this pure resource.