The state-owned general insurance company, NICL conducts the NICL AO exam for the post of Administrative Officer. Aspirants of this profitable and stable job profile under the Government of India must prepare really hard to beat the tough competition. BYJU’S have brought the free NICL AO Mock Test series for the rigorous preparation so that the candidates can outdo the competitors in the NICL AO exam.

Aspirants of any other job profile under the government sector can find detailed information on various Government exams in the article linked here.

The NICL AO is Scale-I cadre Post. Owing to the dignity and the job stability that NICL Administrative officer post offers, the exam enjoys robust contention. Thus, demanding stringent preparation for the exam.

For such rigorous preparation candidates can take free NICL AO Mock tests given below:

The National Insurance Company Limited conducts the NICL AO exam to recruit eligible candidates for the post of Administrative Officer. The exam is conducted over certain intervals of time, depending upon the need of NICL.

A complete set of 25 model questions is provided in each online mock test of NICL AO exam that is based on the NICL AO previous year question paper.

The online NICL AO free mock test will prepare the candidates for the final face-off by giving NICL AO model questions from the three main sections of NICL AO paper. Therefore, the candidates who wish to revise the whole syllabus and analyze the level of preparation must take the NICL AO Test series on a regular basis.

National Insurance Company Limited exam pattern for Administrative Officer Post is set by the NICL itself.

Besides these two written exams, candidates have to go through the Interview round and final Selection process to get appointed as Administrative Officer in NICL.

The prelims exam of NICL AO consists of 3 sections. Details of the same are given below:

The pattern of NICL AO Mock Test Series will be the same as the one given below. Candidates can refer to the NICL AO Free Mock test given below.

Directions 1-3 In each question given below, identify the sentence(s) or part(s) of sentence(s) that is/are correct in terms of grammar or usage (including spelling, punctuation and logical consistency). Then, choose the most appropriate option.

Directions 4-6 the sentences given below have two blanks with 5 pairs of words as options. Choose the pair that best completes the sentence.

Q.4. Exhaustion of natural resources, destruction of individual initiative by governments, control over men’s minds by central _______ of education and propaganda are some of the major evils which appear to be on the increase as a result of the impact of science upon minds suited by __________ to an earlier kind of world.

Q.5. As navigators, calendar makers, and other __________ of the night sky accumulated evidence to the contrary, ancient astronomers were forced to __________ that certain bodies might move in circles about points, which in turn moved in circles about the earth.

Q.6. The genocides in Bosnia and Rwanda, apart from being mis-described in the most sinister and _________ manner as ‘ethnic cleansing’, were also blamed, in further hand-washing rhetoric, on something dark and interior to __________ and perpetrators alike.

Directions 7-9 there are five sentences labelled 1,2,3,4 and 5. Sentence 1 is in its correct place. The four that follow need to be arranged in the logical order to form a meaningful passage. Choose the most appropriate option.

Q.10. In a certain code INVENTION is written as LQYHQWLRQ, then which word will be coded as GHFHPEHU?

Some smileys are cartoons

All cartoons are Joker

No Joker is an artist

I. Some cartoons are artist

II. Some joker being an artist is a possibility

Directions 12-14 Read the information given below and answer the questions following.

Q.14. Which of the following statements is true?

Q.15. In the word ADVERTISEMENT, will remain unchanged when the letters within the word are arranged alphabetically?

The position of A, D and E remain unchanged.

Direction 16-17 study the alpha-numeric series given and answer the following questions.

Q. 16. What will be the 5th element to the right of the 11th element from the left end?

Q.17. How many such vowels are there in the given arrangements which are immediately preceded by ma symbol and followed by a number?

Q.20. Sarthak earns twice as much in the month of March as in each other months of the year. What part of his entire annual earnings was earned in March?

Solution 20. Let Sarthak earnings be y in each other 11 months.

Then Sarthak’s earning in March = 2y

Solution 21. Let the given number = y 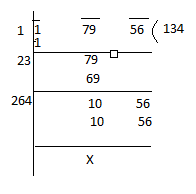 Q.23. The difference between the ages of two men is 10 years. 15 years ago, the elder one was twice as old as the younger one. What is the present age of the elder man is?

Q.25. If the cost price of 10 articles is equal to the selling price of 7 articles, then the gain or loss percent is?

Solution 25. Let the cost price of each article = ₹1

Ans. Yes, each online mock test of NICL AO gives the answer and detailed solutions to the questions.

Q 2. Can I retake the NICL AO practice papers to improve my score?

Ans. As the Free NICL AO online mock tests are available in PDF format, candidates can download the pdf and solve the NICL AO sample papers offline to practice and improve.

Ans. The subjects included in the NICL AO Syllabus are English Language (Objective & Descriptive), Reasoning Ability, Quantitative Aptitude, and General Awareness. The syllabus for NICL AO exam is vast and candidates can know the detailed section-wise bank exam syllabus at the linked article.

Ans. BYJU’S NICL AO Mock Tests are designed by the experts with an aim to provide the best preparation for the SBI PO exam. The full length and sectional NICL AO free mock test simulate the real exam scenario. The detailed solution and answers after each NICL AO practice paper give performance reports that help candidates to improve the weak areas and score better marks in the final face-off.