Class 9 Maths Chapter 6 Lines and Angles MCQs are given here online with correct answers. Students can practise these objective questions and test their problem-solving skills. All the multiple-choice questions are based on the latest CBSE syllabus and NCERT curriculum. Solving these chapter-wise problems will help students to score good marks. Also, check Important Questions for Class 9 Maths.

Below are the MCQs for Chapter 6 Lines and Angles of 9th Standard. Each question has four options, among which one is the correct answer. Cross-check your answers with the one provided here.

4) A straight angle is equal to:

a. Vertically opposite angles

6) Intersecting lines cut each other at:

Explanation: Two lines always intersect each other at one point.

Explanation: If two lines are parallel to each other, they don’t intersect each other.

8) If two lines intersect each other, then the vertically opposite angles are:

Explanation: If two lines intersect each other, then the angles formed at the point of intersection are vertically opposite angles and are equal.

9) In the figure below, which of the following are corresponding angle pairs? 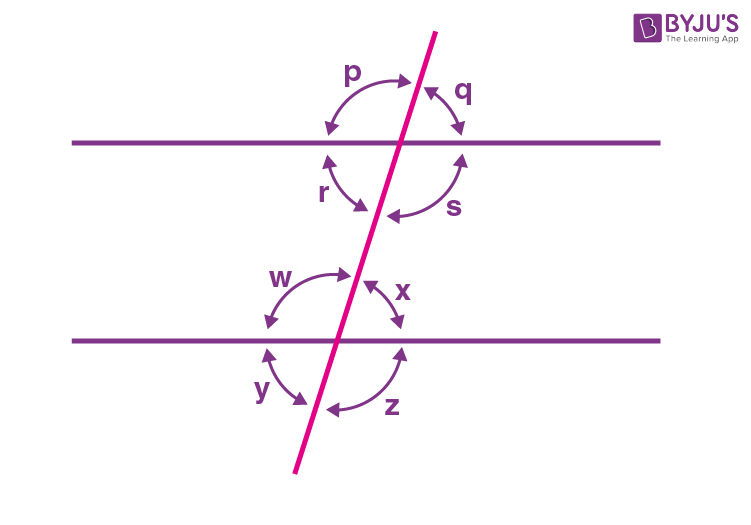 The value of ∠AGE is:

Explanation: Since AB || CD and GE is transversal.

11) An exterior angle of a triangle is 105° and its two interior opposite angles are equal. Each of these equal angles is

The exterior angle of triangle = 105°

Let the interior angles be “x”.

12) If one of the angles of a triangle is 130°, then the angle between the bisectors of the other two angles can be

Assume a triangle ABC, such that ∠BAC=130°

Also, the bisectors of ∠B and ∠C meet at O.

By using the angle sum property of the triangle,

13) If two interior angles on the same side of a transversal intersecting two parallel lines are in the ratio 2 : 3, then the greater of the two angles is 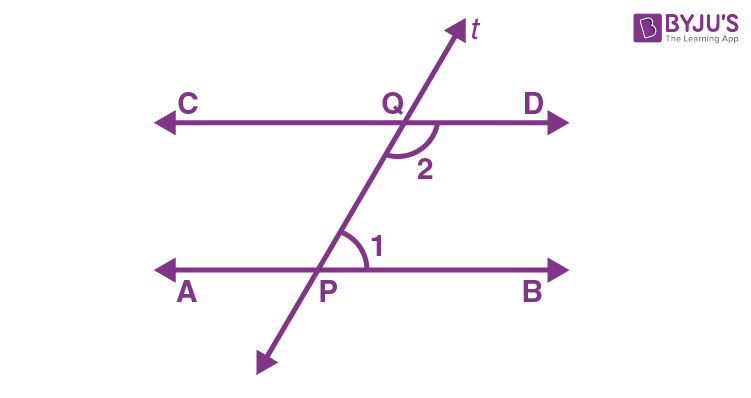 Here, line AB is parallel to the line CD and t is the transversal.

Therefore, ∠1+∠2 = 180° (If a transversal intersects two parallel lines, each pair of consecutive angles are supplementary)

14) If one angle of a triangle is equal to the sum of the other two angles, then the triangle is

(a) a right triangle

(b) an isosceles triangle

(a) a right triangle

Explanation: If the angles are in the ratio of 5:3:7, then a triangle is an acute angle triangle.

Since all the angles are less than 90°, the triangle is an acute angle triangle.

Given that, the angles of a triangle are in the ratio of 2:4:3

Therefore, the smallest angle of a triangle is 40°. 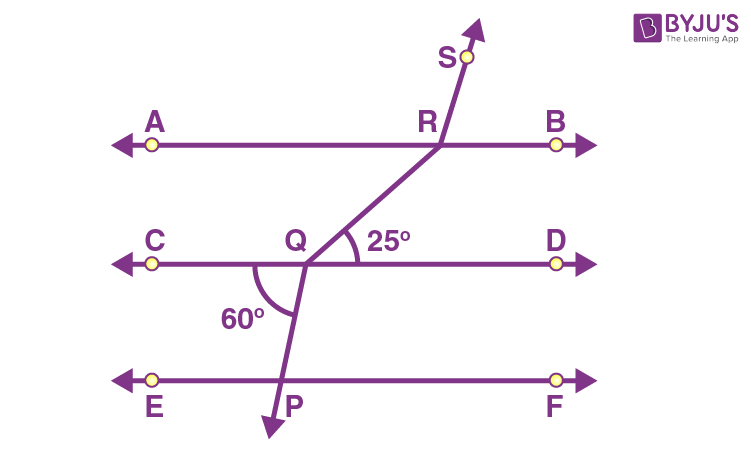 Explanation: An obtuse angle is an angle that is greater than 90°

Since opposite angles of intersecting lines are equal,

Now, by using the fact, that the sum of interior angles of a triangle is 180°, we can write

Stay tuned with BYJU’S – The Learning App and download the app today to get more class-wise concepts.