Geometry is composed of two ancient Greek words: Geo and Metron. Geo means Earth, and Metron means measurement. Geometry is the branch of mathematics that deals with shape, size, position, spatial relationships and properties of different figures. Various parameters are involved in defining a shape, and the essential parameters are lines and angles. In this article, we are going to discuss two important parameters called lines and angles in detail.

Definition of Lines and Angles

The entire geometry begins with a point. A point is a dimensionless entity that specifies the location or position, and it is represented using a dot symbol, and its length is zero.

All the shapes that we see around us consist of an infinite number of points. When a point moves so that its direction remains unaltered, then a straight line is obtained. In other words, a one-dimensional collection of points extending infinitely in both directions represents a line, as shown below. A line never ends.

A line is a one dimensional figure with a straight set of points that extend in opposite directions. That means, it has no ends in both directions(infinite) and has no thickness.

Get more information about lines here.

A lines segment is a portion of a line with two endpoints as shown in the figure given below:

A ray is a part of a line that has one endpoint (i.e. starting point) and it extends in one direction infinitely.

Apart from the above, there are different types of lines such as parallel, perpendicular, intersecting and non-intersecting lines, etc.

If a ray is rotated about its endpoint then the measure of its rotation between the final and initial position of the ray is known as an angle. In fig. 3,

Angles are classified into different types based on the measure of angle between the initial and terminal side. They are:

Obtuse angle: Greater than 90 degrees and less than 180 degrees

Reflex angle: Greater than 180 degrees and less than 360 degrees

To solve more problems on topic Lines and Angles visit BYJU’S – The Learning App, which provides detailed and step by step solutions to all questions in an NCERT Books. Also, take free tests to practice for exams. 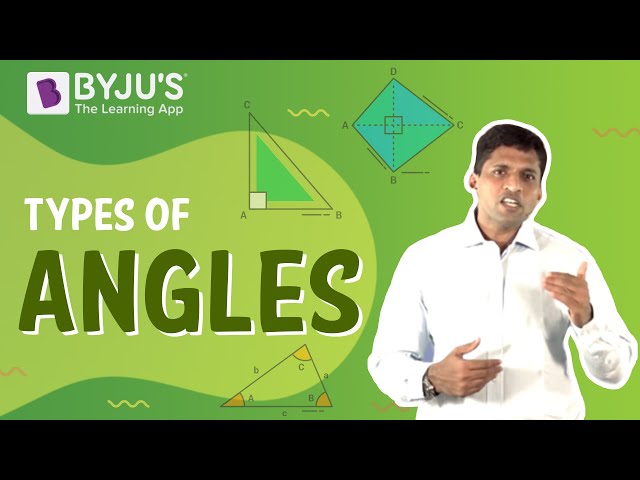 Quiz on Introduction to lines and angles
Q5