Angle bisector in geometry refers to a line that splits an angle into two equal angles. Before talking about an angle bisector, let us quickly recall the different types of angles in mathematics. Depending on the inclination between the two arms, an angle may be acute (less than 90-degrees, like 60-degree angle), obtuse (more than 90-degrees) or right angle (exactly 90-degrees). Constructing angles is an important part of geometry as this knowledge is extended for construction of other geometric figures as well, primarily the triangles. A number of angles can be constructed simply by bisecting some common angles.

What is an Angle Bisector?

Definition: An angle bisector or the bisector of an angle is a line that divides an angle into two equal parts. Every angle has an angle bisector. It is also the line of symmetry between the two arms of an angle, the construction of which enables you to construct smaller angles. Say you are required to construct a 30° angle. This can be performed by creating a 60° angle and then bisect it. Similarly, 90-degree, 45-degree, 15-degree and other angles are constructed using this concept. 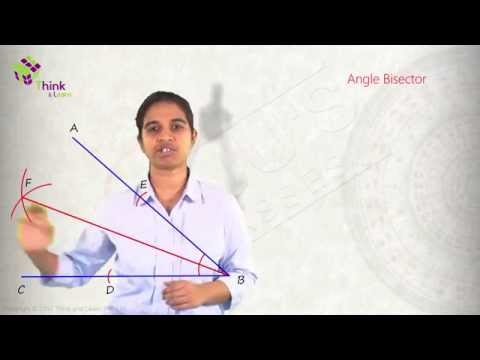 How to Construct an Angle Bisector?

You require a ruler and a compass to construct angles and their bisectors. Given a known or unknown ∠PQR, the steps to construct its angle bisector are:

The line that was drawn through Q represents the angle bisector of the ∠PQR.

Note: If an angle bisector bisects a line segment at 90°, it is known as perpendicular bisector of that line.

Topics Related to Bisector of an Angle

To learn more about angle bisectors and other geometry topics, download BYJU’S- The Learning App.