NCERT Solutions for Class 10 History Chapter 3 The Making of a Global World discusses the creation of the world which had a long history – of trade, of migration, of people in search of work, the movement of capital, etc. Globalisation is an economic system with the free movement of goods, technology, ideas and people across the globe. To understand the complex topics related to globalisation, silk routes, the role of technology, etc. NCERT Solutions for Class 10 History Chapter 3 will help you in the right approach.

Chapter 3 The Making Of A Global World 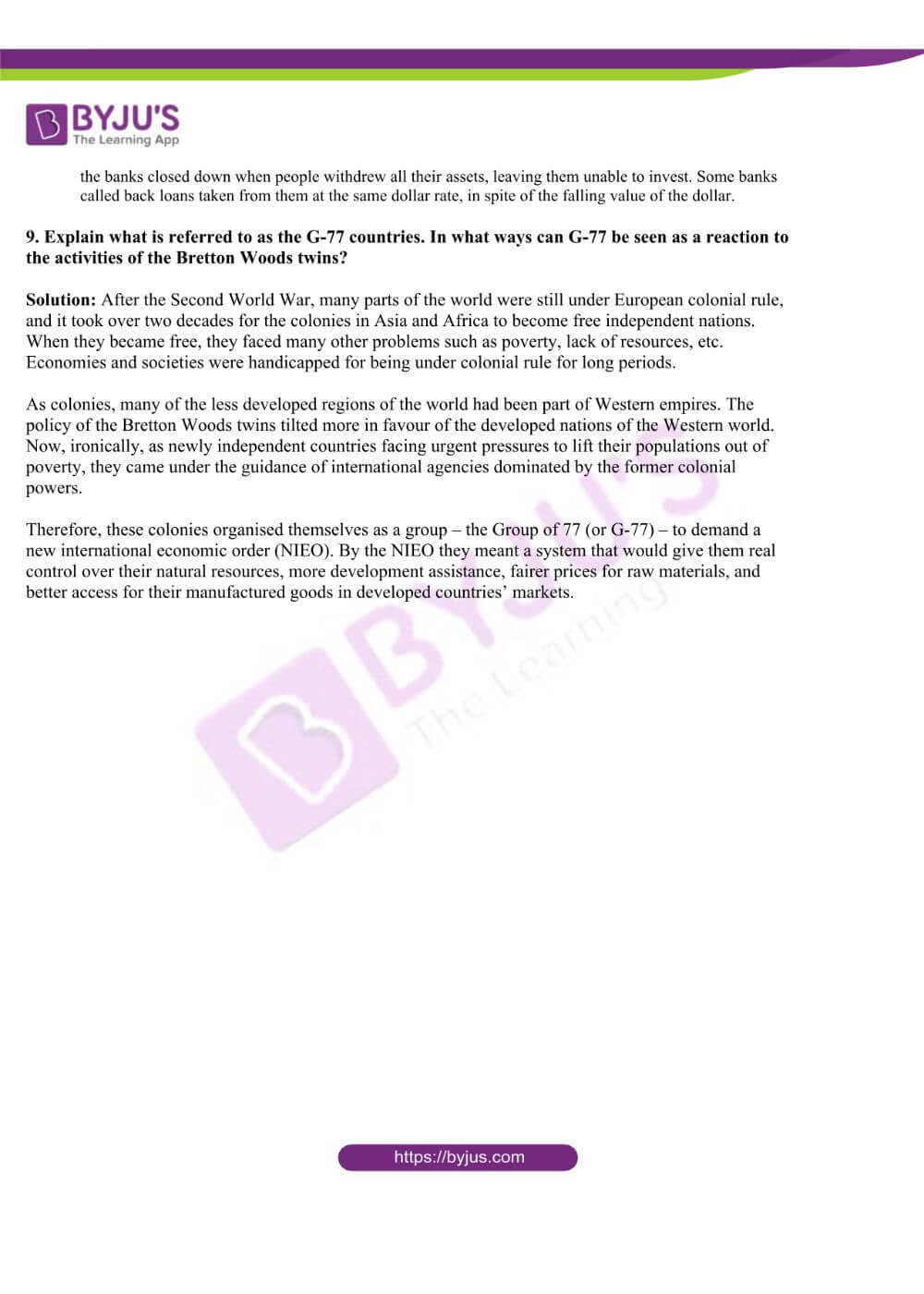 1. Give two examples of different types of global exchanges which took place in the seventeenth century, choosing one example from Asia and one from the Americas.

Solution: The following are examples of cross-cultural exchanges from Asia and the Americas:

a. The Silk Route (Asia): The silk routes are a good example of cross-cultural trade and connectivity between distant parts of the world. The name ‘silk routes’ points to the importance of West-bound Chinese silk cargoes along this route.

b. Food from the Americas: The food that is part of our staple diet today like potatoes, soya, groundnuts, maize, tomatoes, chillies, sweet potatoes etc. were not known to our ancestors until the accidental discovery of the Americas by Christopher Columbus.

These foods only made it to Europe and the rest of the world after this monumental discovery of the new continent.

2. Explain how the global transfer of disease in the pre-modern world helped in the colonisation of the Americas.

Solutions: The global transfer of disease in the pre-modern world helped in the colonization of the Americas. The reason was that the native Americans were not immune to the diseases that the European settlers brought with them. The Europeans were to a certain extent immune to the effects of diseases like smallpox due to centuries of exposure, but the native Americans had no such defence against this disease, as they were isolated from diseases native to the old world.

At times, settlers deliberately practised biological warfare on the natives by giving items laced with smallpox germs as ‘gifts of friendship’. The disease was far more effective in wiping out entire tribes and communities without having to resort to firearms.

3. Write a note to explain the effect of the following:

Impact of MNC’s decision to relocate production in Asian Countries was as follows:

a. It provided a cheap source of labour for MNCs

b. It stimulated world trade and increased capital inflow in the Asian Countries

c. The local population now had a greater choice of goods and services along with prospects of greater employment opportunities for them.

4. Give two examples from history to show the impact of technology on food availability.

5. What is meant by the Bretton Woods Agreement?

Solution: In order to preserve economic stability and full employment in the industrial world, the post-war international economic system was established. To execute the same, the United Nations Monetary and Financial Conference was held in July 1944 at Bretton Woods in New Hampshire, USA. The Bretton Woods Conference established the International Monetary Fund (IMF) to deal with external surpluses and shortages of its member-nations. The International Bank for Reconstruction and Development (popularly known as the World Bank) was set up to financial post-war reconstruction, and they started the financial operations in 1947.

Under the agreement, currencies were pegged to the price of gold, and the US dollar was seen as a reserve currency linked to the price of gold. Decision-making authority was given to the Western industrial powers. The US was given the right of veto over key IMF and World Bank decisions. The Bretton Woods system was based on fixed exchange rates. The Bretton Woods system Opened an era of unique growth of trade and incomes for the Western industrial nations and Japan.

6. Imagine that you are an indentured Indian labour in the Carribean. Drawing from the details in the chapter, write a letter to your family describing your life and feelings

My work as an indentured labourer Jamaica is far from a walk in the park. Through this letter, I want to tell you about my life here.

When the contractor hired me, he was quite economical with the truth about the living and working conditions. To say nothing of the kind of work and place of work.

We have very few rights, with the contractor living up to the behaviour standards expected of them in the Carribean -extremely harsh. He treats us like animals since we are a minority and thus easy targets for his wrath. Accidents are common in the sugar plantations in Jamaica. One time I saw a worker burnt alive when the liquid sugar we were boiling accidentally spilt on him. Since he cannot work with his third-degree burns, the contractor saw it fit to throw him out without any due wages paid. We don’t have any rights to speak or to express our dissatisfaction about the working conditions. And if we do, we will face the overseer’s whips.

Whenever I do not attend my work, I am liable to be to jail. There is a lot of work at the plantations with a heavy workload and less time to finish it all.

In case of unsatisfactory work, my wages are cut. If there is hell on earth, it certainly is this. I know my writing will cause you anguish but rest assured there is the talk of new laws underway to protect labourers like us. Thus, this situation will pass soon.

7. Explain the three types of movements or flows within the international economic exchange. Find one example of each type of flow which involved India and Indians, write a short account of it.

Solution: The three types of movements or flows within the international economic exchange are trade flows, human capital flows and capital flows or investments. These can be explained as—the trade in agricultural products, migration of labour, and financial loans to and from other nations.

India was a hub of trade in the pre-modern world, and it exported textiles and spices in return for gold and silver from Europe.

Fine cotton was produced in India and was exported to Europe. With industrialization, British cotton manufacture began to expand, and industrialists pressurized the government to restrict cotton imports and protect local industries. As a result of the tariffs that were imposed on cloth imports, the inflow of fine Indian Cotton began to decline.

In the field of labour, indentured labour was provided for mines, plantations and factories abroad, in huge numbers, in the nineteenth century. This was an instrument of colonial domination by the British. Indentured labourers were hired under contacts which promised return travel to India after they had worked five years on their employer’s plantation. The living conditions were harsh, and the labourers had little protection of the law or from it as they had little rights.

Lastly, Britain took generous loans from the USA to finance the World War. Since India was an English colony, the impact of these loan debts was felt in India too. Food and other crops for the world market required capital. Large plantations could borrow it from banks and markets.

8. Explain the causes of the Great Depression

Solution: The Great Depression was a result of many factors:

9. Explain what is referred to as the G-77 countries. In what ways can G-77 be seen as a reaction to the activities of the Bretton Woods twins?

Solution: After the Second World War, many parts of the world were still under European colonial rule, and it took over two decades for the colonies in Asia and Africa to become free independent nations. When they became free, they faced many other problems such as poverty, lack of resources, etc. Economies and societies were handicapped for being under colonial rule for long periods.

As colonies, many of the less developed regions of the world had been part of Western empires. The policy of the Bretton Woods twins tilted more in favour of the developed nations of the Western world. Now, ironically, as newly independent countries facing urgent pressures to lift their populations out of poverty, they came under the guidance of international agencies dominated by the former colonial powers.

Therefore these colonies organised themselves as a group – the Group of 77 (or G-77) – to demand a new international economic order (NIEO). By the NIEO they meant a system that would give them real control over their natural resources, more development assistance, fairer prices for raw materials, and better access for their manufactured goods in developed countries’ markets.

The Making of a Global World Summary

The NCERT Solutions for Class 10 Social Studies History – India and the Contemporary World – II Chapter 3 talks about the following topics:

2.4 Rinderpest, or the Cattle Plague

3.3 Rise of Mass Production and Consumption

3.5 India and the Great Depression

4.4 End of Bretton Woods and the Beginning of Globalisation

What are the topics that students can learn from the NCERT Solutions for Class 10 History Chapter 3?

The main topics that students would learn from NCERT Solutions for Class 10 History Chapter 3 are:
1. The Pre-modern World
2. The Nineteenth Century (1815 – 1914)
3. The Inter-war Economy
4. Rebuilding a World Economy: The Postwar Era


How to use the NCERT Solutions for Class 10 History Chapter 3 for the CBSE Term II exam preparations?

For preparing the Chapter 3 of NCERT Solutions for Class 10 History Students first require an idea about globalisation. The chapter discusses the history of trade, migration, people in search of work, the movement of capital. The NCERT Solutions play a vital role in helping students learn the answers to the textbook questions from the exam perspective. Further, all the answers are student-friendly and students can use when reading or revising the chapter to obtain a firm grip over it.

What are the topics discussed under Inter-War economy in the Chapter 3 of NCERT Solutions for Class 10 History?

The topics that are discussed under Inter-War economy in Chapter 3 of NCERT Solutions for Class 10 History are:
1. Wartime Transformations
2. Post-war Recovery
3. Rise of Mass Production and Consumption
3. The Great Depression
3. India and the Great Depression.