NCERT Solutions for Class 9 Maths Chapter 10 – Circles Exercise 10.5 is provided here, in downloadable PDF format. Click on the specified link given below to download it. These solutions have been designed by our Maths experts, to make each student understand the concepts in a better way. The answers given for each question in NCERT solutions for 9th Maths subject are as per the NCERT syllabus and guidelines, no other out of syllabus pattern has been included in this. Solving the problems, taking these solutions as reference material, will help students to score well in the first and second term exam. 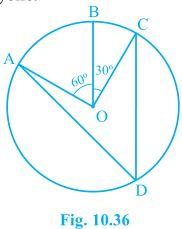 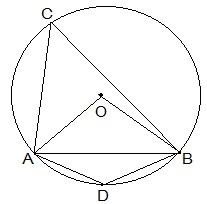 So, it can be said that ΔOAB has all equal sides and thus, it is an equilateral triangle.

Now, since ACBD is a cyclic quadrilateral, 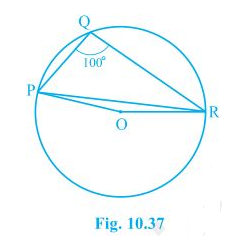 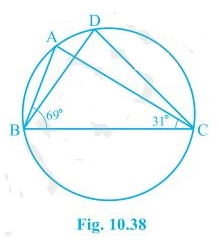 We know that angles in the segment of the circle are equal so,

Now in the in ΔABC, the sum of all the interior angles will be 180° 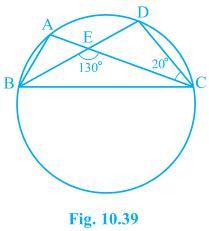 We know that the angles in the segment of the circle are equal.

Now, by using the exterior angles property of the triangle 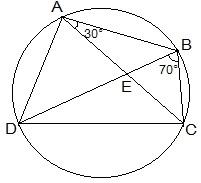 We know that angles in the same segment are equal.

Now, ∠ BAD will be equal to the sum of angles BAC and CAD.

We know that the opposite angles of a cyclic quadrilateral sums up to 180 degrees.

Also, ∠ BCA = ∠ CAB (They are the angles opposite to equal sides of a triangle)

7. If diagonals of a cyclic quadrilateral are diameters of the circle through the vertices of the quadrilateral, prove that it is a rectangle.

Draw a cyclic quadrilateral ABCD inside a circle with center O such that its diagonal AC and BD are two diameters of the circle. 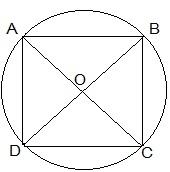 We know that the angles in the semi-circle are equal.

So, as each internal angle is 90°, it can be said that the quadrilateral ABCD is a rectangle.

8. If the non-parallel sides of a trapezium are equal, prove that it is cyclic. 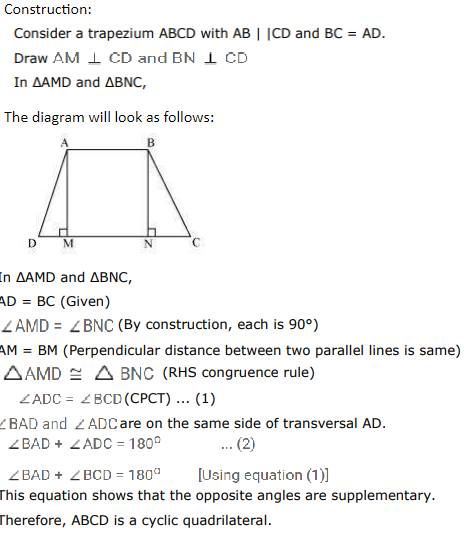 9. Two circles intersect at two points B and C. Through B, two line segments ABD and PBQ are drawn to intersect the circles at A, D and P, Q respectively (see Fig. 10.40). Prove that ∠ ACP = ∠ QCD. 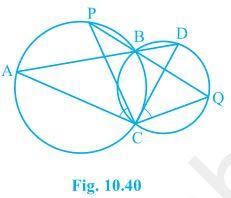 Join the chords AP and DQ.

For chord AP, we know that angles in the same segment are equal.

It is known that ABD and PBQ are two line segments which are intersecting at B.

At B, the vertically opposite angles will be equal.

10. If circles are drawn taking two sides of a triangle as diameters, prove that the point of intersection of these circles lie on the third side.

First draw a triangle ABC and then two circles having diameter as AB and AC respectively.

We know that angle in the semi-circle are equal Since, ∠ ABC and ∠ ADC are 90°, it can be said that They lie in the semi-circle.

So, triangles ABC and ADC are in the semi-circle and the points A, B, C and D are concyclic.

Hence, CD is the chord of the circle with center O.

We know that the angles which are in the same segment of the circle are equal.

12. Prove that a cyclic parallelogram is a rectangle. Thus, ABCD is a rectangle.

Exercise 10.5 has twelve questions based on the topics and theorems given as below; Angle Subtended by an Arc of a Circle
Theorem 1: The angle subtended by an arc at the center is double the angle subtended by it at any point on the left part of the circle.
Theorem 2: Chords which are equal in distance from the center of a circle are also equal in length.
Theorem 3: Angles in the same segment of a circle are equal.
Theorem 4: If a line segment joining two points subtends equal angles at two other points lying on the same side of the line containing the line segment, the four points lie on a circle. Cyclic Quadrilaterals
Theorem 1: The sum of both pair of opposite angles of a cyclic quadrilateral is 180º.
Theorem 2: If the sum of a pair of opposite angles of a quadrilateral is 180º, the quadrilateral is cyclic. The questions in this exercise have long answers, based on constructions and proofs. Solve each exercise problems for chapter 10 of Maths Class 9 here with detailed answers. Also, get our advanced learning materials such as notes and tips and tricks to prepare for first and second term exams. For all the classes, from 6 to 12, NCERT solutions are provided here, chapter wise and exercise wise, in PDFs. Download and learn offline as well.