NCERT Solutions for Class 9 Maths Chapter 10 – Circles Exercise 10.6 is provided here, which can be downloaded in PDF format, just by clicking on the link given below. Our subject experts have designed them keeping into consideration NCERT syllabus and guidelines(2020-21). These are helpful for students, who want to score good marks in Maths.

Students can use NCERT solutions for 9th Maths subject as reference material to do their homework and prepare for the examination. It will help them to understand the concepts in a more descriptive way. 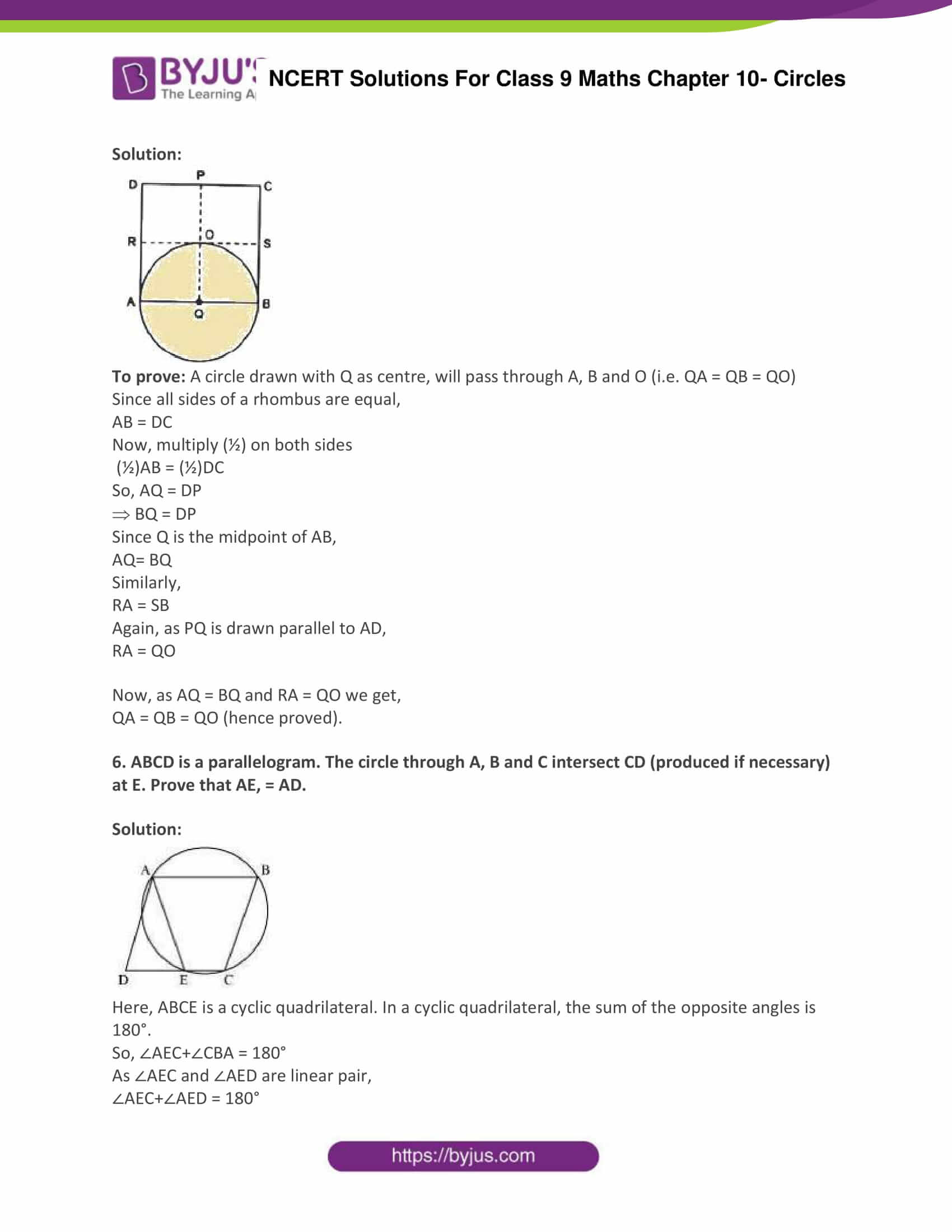 1.  Prove that the line of centres of two intersecting circles subtends equal angles at the two points of intersection.

2. Two chords AB and CD of lengths 5 cm and 11 cm respectively of a circle are parallel to each other and are on opposite sides of its centre. If the distance between AB and CD is 6 , find the radius of the circle. Here, OM ⊥ AB and ON ⊥ CD. is drawn and OB and OD are joined.

We know that AB bisects BM as the perpendicular from the centre bisects chord.

From equation 1 and equation 2 we get 3. The lengths of two parallel chords of a circle are 6 cm and 8 cm. If the smaller chord is at a distance 4 cm from the centre, what is the distance of the other chord from the centre?

4. Let the vertex of an angle ABC be located outside a circle and let the sides of the angle intersect equal chords AD and CE with the circle. Prove that ∠ABC is equal to half the difference of the angles subtended by the chords AC and DE at the centre. 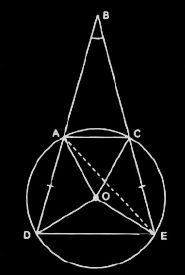 We know, any exterior angle of a triangle is equal to the sum of interior opposite angles.

DE subtends ∠DOE at the centre and ∠DAE in the remaining part of the circle.

5. Prove that the circle drawn with any side of a rhombus as diameter, passes through the point of intersection of its diagonals.

Since all sides of a rhombus are equal,

Now, multiply (½) on both sides

Since Q is the midpoint of AB,

Again, as PQ is drawn parallel to AD,

6. ABCD is a parallelogram. The circle through A, B and C intersect CD (produced if necessary) at E. Prove that AE, = AD.

We know in a parallelogram; opposite angles are equal.

Now, AD and AE are angles opposite to equal sides of a triangle,

Here chords AB and CD intersect each other at O.

OB = OD (Given in the question)

OA = OC (Given in the question)

In quadrilateral ACBD, opposite sides are equal.

So, ACBD is a parallelogram.

We know that opposite angles of a parallelogram are equal.

Also, as ABCD is a cyclic quadrilateral,

As ACBD is a parallelogram and one of its interior angles is 90°, so, it is a rectangle. 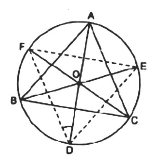 Here, ABC is inscribed in a circle with center O and the bisectors of ∠A, ∠B and ∠C intersect the circumcircle at D, E and F respectively.

As angles in the same segment are equal, so,

By adding equations (i) and (ii) we get,

In a similar way,

9. Two congruent circles intersect each other at points A and B. Through A any line segment PAQ is drawn so that P, Q lie on the two circles. Prove that BP = BQ.

The diagram will be

Here, ∠APB = ∠AQB (as AB is the common chord in both the congruent circles.)

So, the angles opposite to equal sides of a triangle. Here, join BE and CE.

Now, since AE is the bisector of ∠BAC,

This implies, chord BE = chord EC

Exercise 10.6 has ten questions in total. It is mentioned as an optional exercise in the book, which consists of problems based on all the topics covered in the chapter. Though it’s an optional exercise, students should solve them as well, to have a good practice. Also, solve problems for each exercise of chapter 10 of Maths Class 9 here with detailed answers.

We are providing here some of the advanced learning materials such as notes, tips and tricks to prepare for exams. For all the Classes of 6th to 12th, PDFs of NCERT solutions are provided here, chapter wise and exercise wise. Students can download them and learn offline as well.