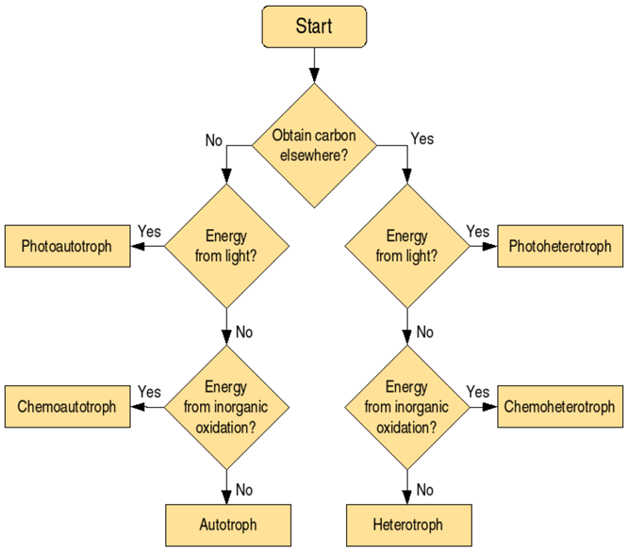 What are the two types of Autotrophic Bacteria?

Apart from energy requirements, both types of bacteria need a carbon source to synthesize their food, e.g. carbon dioxide and other compounds.

Click here to get MCQs on Morphology of Bacteria

Photosynthetic bacteria are used as biofertilizers, for bioremediation, waste water treatment and purification of polluted water.

Cyanobacteria (blue-green algae) perform oxygenic photosynthesis. They use H2O as an electron donor and oxygen is produced in the reaction. They do not possess chloroplasts but photosynthetic pigments like chlorophyll-a are present in the cytosol.

Cyanobacteria are filamentous or colonial, they may also perform nitrogen fixation and have specialized cells for that known as heterocyst. E.g. Nostoc, Anabaena, etc.

Most of the photosynthetic bacteria are anoxygenic, i.e. they do not utilize water as an electron donor, instead, they use H2S, H2 or thiosulphate as reducing agent and hydrogen sources. They contain a photosynthetic pigment known as bacteriochlorophyll (BChl), which is like chlorophylls in plants.

They are found in hot sulphur springs and stagnant water. These bacteria thrive in anaerobic or oxygen poor environments. They belong to the order Chromatiales of proteobacteria. They utilize hydrogen sulfide or thiosulphates as a reducing agent and release sulphur. The main pigments are bacteriochlorophyll ‘a’ and ‘b’ located in the plasma membrane. Their photosystem is similar to PSII of higher plants.They are of two types:

They mainly use hydrogen as a reducing agent. They belong to the order Rhodospirillales.

They are also helpful in bioremediation of heavy metals and reducing emission of greenhouse gases.

They are obligate anaerobe and generally non-motile. They belong to the Chlorobiaceae family. They are found deep in the ocean in extremely low light and anoxic environment and near thermal vents. The electron donor is sulphide, hydrogen or ferrous ion. Carbon fixation is done by reverse tricarboxylic acid or RTCA cycle. They contain bacteriochlorophyll ‘c’, ‘d’ and ‘e’ along with bacteriochlorophyll ‘a’. Pigments are present in the plasma membrane and chlorosomes. Their photosystem is similar to PSI of higher plants.

Chlorobium tepidum is a mixotroph, which derives carbon from both organic and inorganic compounds.

Have you ever wondered how some bacteria survive in such extreme environments? Chemosynthetic autotrophs do so by relying on chemical compounds to get energy.

They can be aerobic or anaerobic. Depending on the source, where they derive energy from, they are categorised into various types such as sulphur bacteria, hydrogen bacteria, iron bacteria, nitrogen bacteria, methanotrophs, etc. They play an important role in nutrient recycling such as nitrogen, phosphorus, sulphur, iron, etc.

Nitrifying bacteria convert ammonia to nitrite and then to nitrate. In this oxidation process, energy is released. Nitrate is utilized by plants. E.g. Nitrosomonas, Nitrobacter

What are chemosynthetic autotrophs?

What are some examples of chemosynthetic autotrophs?