Chromosomes are thread-like structures present in the nucleus, which carries genetic information from one generation to another. They play a vital role in cell division, heredity, variation, mutation, repair and regeneration.

In Eukaryotic cells, genetic material is present in the nucleus in chromosomes, which is made up of highly organized DNA molecules with histone proteins supporting its structure.

Chromosome means ‘coloured body’, that refers to its staining ability by certain dyes.

Karl Nägeli in 1842, first observed the rod-like structure present in the nucleus of the plant cell.

Walter Sutton and Theodor Boveri in 1902 suggested that chromosomes are the physical carrier of genes in the eukaryotic cells.

Karyotyping is a technique to study the structure of chromosomes present in a species. Chromosomes are isolated, stained and photographed. This technique is useful in finding out any chromosomal abnormalities. 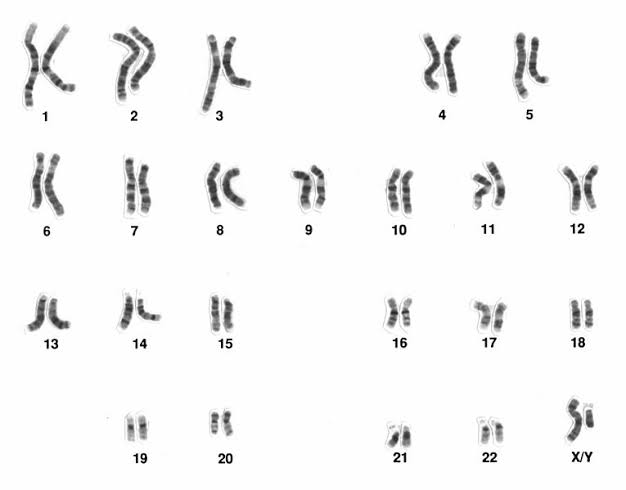 Karyotype of a human cell (male)

The chemical composition of a chromosome is histone proteins and DNA. Each cell has a pair of each kind of chromosome known as a homologous chromosome. Chromosomes are made up of chromatin, which contains a single molecule of DNA and associated proteins. Each chromosome contains hundreds and thousands of genes that can precisely code for several proteins in the cell. Structure of a chromosome can be best seen during cell division. 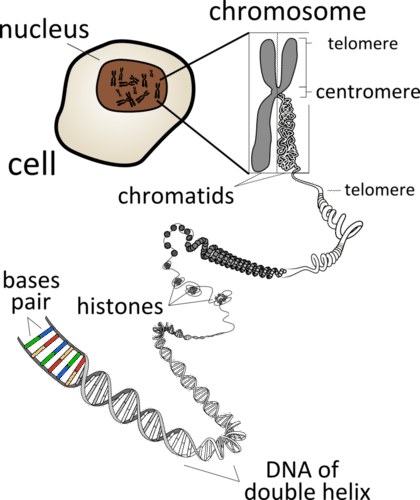 Main parts of chromosomes are:

Labelled diagram of chromosome is given below. 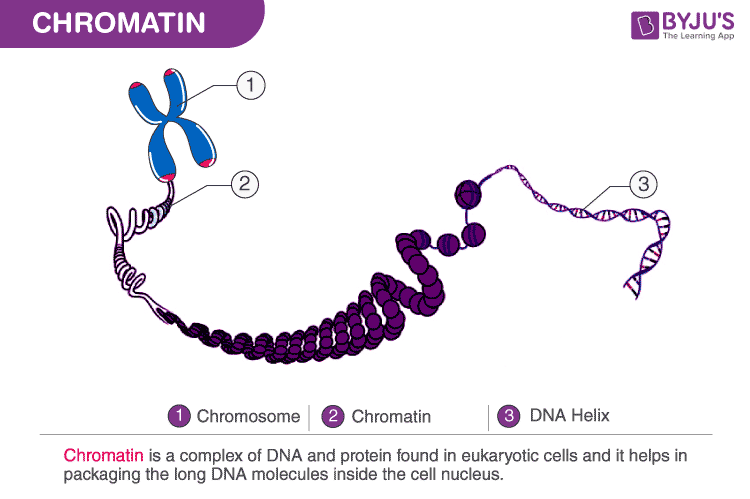 Based on the number of centromeres present

Based on the position of the centromere What are the functions of a chromosome?

Chromosomes are the highest level of organisation of DNA and proteins. The main function of chromosomes is to carry the DNA and transfer the genetic information from parents to offspring. Chromosomes play an important role during cell division. They protect the DNA from getting tangled and damaged.

What is the structural unit of a chromosome?

The basic structural unit of chromosomes is the nucleosome, which is formed by DNA wrapped around histone proteins. These connected nucleosomes form chromatin fibres, which further gets condensed into a chromosome.

What are the two main components of chromosomes?

The two main components of chromosomes are DNA and proteins.

What are the 3 types of DNA?

The three major types of DNA are A-DNA, B-DNA and Z-DNA.

What is the difference between DNA and chromosomes?

DNA is a genetic material that is organised with proteins into chromosomes to fit inside the cell. DNA carries genetic information.

What is the purpose of chromonemata in chromosome?

Chromonemata function as gene carriers and support the maintenance of chromosome structure. They have chromomeres, which may or may not resemble beads. Chromonemata is also known as chromonema.

Mention the relationship between nucleus and chromosomes.

Chromosomes are structures that look like threads and contain the DNA molecule in the nucleus of every cell. Each chromosome is formed of DNA tightly coiled around histone proteins multiple times to support its structure.