Microbes are present everywhere even under extreme conditions, where no other life-form could exist.

They are diverse and include viruses, bacteria, protozoa, fungi, viroids, prions and other microscopic animals.

They may be pathogenic but have an important role to play in human welfare.

Microbes can be easily grown in laboratories or at industrial scale for research and production of various useful products.

Microbes are useful to human and the environment in many ways:

For industrial-scale production, microorganisms are grown in fermenters. Many alcoholic beverages, antibiotics and chemicals are produced for commercial purposes. 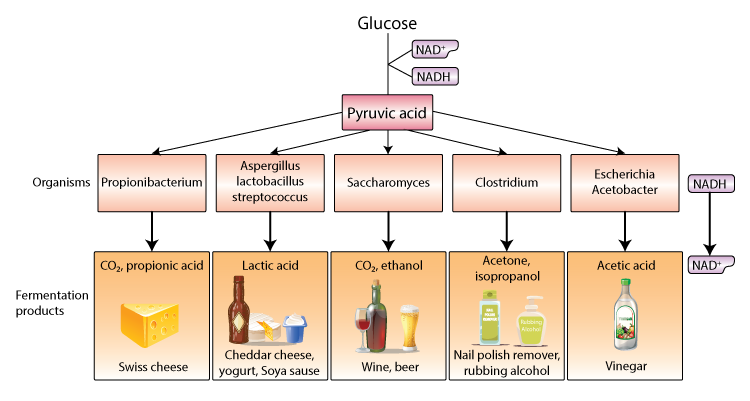 Saccharomyces cerevisiae (Brewer’s yeast) has been used since ancient times for the production of alcoholic beverages from malted cereals and fruit juices.

Depending on the raw material and fermentation processes used, various kinds of beverages are produced, e.g. without distillation- wine and beer and with distillation- whisky, rum and brandy.

b) Antibiotics and Vaccines

The first antibiotic produced was Penicillin. It was discovered from the fungus Penicillium notatum by Alexander Fleming. Howard Florey and Ernest Chain extracted and produced the antibiotic. It was used during World War II to treat American soldiers. Florey, Chain and Fleming received the Nobel prize for their work in 1945.

Since then many antibiotics have been produced. Some examples are:

There are many synthetic antibiotics prepared these days.

Vaccines are prepared from weakened or attenuated disease-causing microorganisms, its surface proteins or toxins. Our body acquires immunity against that particular pathogen.

The first vaccine was developed by Edward Jenner for smallpox.

Many vaccines have been developed for various viral diseases, e.g. Polio, DPT, Measles, Hepatitis-A and B, Pneumococcal, Influenza, etc.

Enzymes are also produced by microorganisms and are used commercially for various purposes. E.g. Streptococcus produces an enzyme called streptokinase, which is genetically modified and used as a clot-buster for removing clots from the blood vessels.

Lipases- used in detergents and form removal of oily stains

Some bioactive molecules are prepared and are used for various purposes.

Cyclosporin A- produced by Trichoderma polysporum (fungus). It is a suppressor of the immune system, used in organ transplant patients

It is important to treat wastewater before disposal because it contains organic matter and pathogenic bacteria. Sewage treatment plants (STPs) are used for this purpose. Microbes (heterotrophic), which are present naturally in the sewage water are used.

In the first step, filtration and sedimentation are performed to remove floating debris and grit, i.e. soil and small pebbles, respectively. Primary sludge is the solid that settles down and primary effluent is the supernatant liquid.

It is also called biological treatment. The growth of aerobic microbes is facilitated into large aeration tanks by mechanically agitating the effluent and pumping the air into it. This decreases biochemical oxygen demand (BOD). BOD refers to the rate of oxygen uptake by microorganisms and tells the amount of organic matter present in the sample.

After significantly reducing BOD, the effluent is allowed to settle in the settling tank. The bacterial flocs (bacterial mass forming a mesh-like structure in association with fungal filaments) sediment and it is known as activated sludge.

The activated sludge is digested in an anaerobic sludge digester. Some of the sludge is allowed to move back to the aeration tank and serves as an inoculum. Biogas (a mixture of gases, e.g. methane, CO2, H2S, etc.) produced from digested sludge, can be used as a fuel.

The secondary effluent is released into rivers and streams. We can keep our rivers less polluted by releasing only treated sewage water into them. The Government has initiated the Ganga and Yamuna action plan for this purpose.

Methanogens, e.g. methanobacterium are present in the anaerobic sludge and produce biogas in sewage treatment, i.e. predominantly methane and a mixture of other gases. These bacteria are also present in the rumen of cattle and help in the digestion of cellulose.

Gobar gas is produced from the dung of the cattle and is used in villages for various purposes.

IARI (Indian Agricultural Research Institute) and KVIC (Khadi and Village Industries Commission) have put in lots of effort in developing the technology for biogas production.

5. Biocontrol of pest and diseases

Chemical pesticides and insecticides kill both harmful and useful organisms. By understanding natural predation and interacting webs, an appropriate method of biocontrol can be developed.

Dragonflies and ladybugs help in controlling mosquitoes and aphids.

Bacillus thuringiensis is used to control caterpillars and insect larvae. Some plants have been genetically modified and the gene coding for the toxin has been introduced in the plant genome. E.g. Bt-cotton is resistant to pests.

Trichoderma (a fungus) is used to biocontrol various plant pathogens. The fungus is commonly present in the roots.

Baculoviruses of the genus Nucleopolyhedrovirus are excellent biocontrol agents. They attack arthropods but are not harmful to plants and other animals such as birds, fish and mammals.

Excessive use of chemical fertilizers is linked to pollution and harmful effects. Use of microorganisms as biofertilizers is highly recommended.

Fungi, bacteria and cyanobacteria are the main sources of biofertilizers.

Azotobacter and Azospirillum are free-living nitrogen-fixing bacteria present in the soil.

Fungal association in mycorrhiza also enriches the nutrient content of the soil. Fungi of the genus Glomus absorbs phosphorus for the plant.

These symbiotic associations not only benefit by enriching the nutrient content but also provide disease resistance and tolerance to drought and salinity.

Most of the cyanobacteria can fix atmospheric nitrogen, e.g. Nostoc, Anabaena, Oscillatoria, etc. Cyanobacteria are extensively used in paddy fields as a biofertilizer. Blue-green algae are autotrophic and present everywhere in aquatic and terrestrial habitats. They increase soil fertility by adding organic matter.