RRB ALP Result – The Railway Recruitment Board will release the RRB ALP Result 2021 after the successful completion of the exam. RRB ALP notification 2021 is yet to be announced.

You can also check the RRB Result page for information regarding the result announcements for various Railways examinations.

Check the RRB ALP notification page for further information on the notices regarding Railways ALP and Technician exams.

Railway Recruitment Board announces the RRB ALP Result within a month from the date of examination. The result for Railway ALP is published on the official website of respective Regional RRBs. Candidates can check their RRB loco pilot result by visiting the regional RRB websites which they applied for while filling in the application form.

The candidates who are selected by the board, their roll numbers are mentioned in the final list of RRB ALP Result. Selection of candidates is done on the basis of written examination followed by an aptitude test and document verification for the post of Assistant Loco Pilot and Technician in the Indian Railways.

The important RRB ALP Result date for the year 2021 is highlighted below:

The last Railways ALP exam was conducted for the year 2018-2019. The final RRB ALP result for the same has also been released by the Railway Board.

RRB ALP Result 2018 dates – The dates for the Assistant Loco Pilot result 2018 are as follows:

Candidates have to follow the steps given below to check the RRB ALP result. 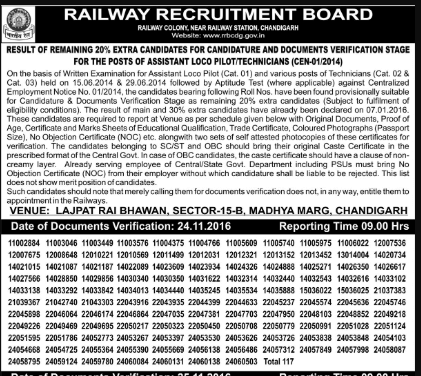 RRB Assistant Loco Pilot exams were conducted online in multiple shifts across the country in different examination centres. All the stages of RRB ALP 2018-2019 exam have been completed successfully by all RRBs and results for the same has been published on the respective RRB websites.

Candidates can check the Railways ALP zone-wise result for the year 2018 – 2019 from the links given below:

What After RRB ALP Final Result?

Candidates who clear both RRB ALP CBT I and CBT II as well as CBAT are called for next process i.e. document verification. Candidates final selection for RRB ALP & technician post is made based on DV as well as the merit.

It is important to note that the RRB ALP final merit list is created on the basis of marks scored by the candidates in Part A of CBT II (70%) and CBAT (30%).

Now, what are the documents required by the candidates for RRB ALP Document Verification process?

The Railway Recruitment Board along with the RRB ALP result releases the cut off marks for ALP exam. The cut-off marks for RRB ALP exam is released separately for CBT I and CBT II of ALP examination.

RRB releases the RRB ALP Cut Off marks both zone-wise and category wise. Candidates, in order to get selected for RRB ALP posts, are required to obtain the minimum cut off marks in each stage of the ALP examination.

The minimum qualifying cut off for RRB ALP examination is as mentioned below:

Important Note: As per the official notification of RRB ALP exam, 2% of relaxation for PwD candidates may be given in order to fill PWD candidates vacancies.

For candidates appearing in RRB ALP 2019, it is very important to know the cut off marks for ALP examination because it will help them to prepare for the exam strategically.

Therefore, candidates can check the detailed  RRB ALP Cut Off in the given link to know the expected and previous year cut off as well as zone and category wise cut off.

Q.1. How can candidates check their RRB ALP Result?

Ans. To check the Railway ALP result candidates are required to log on to the official website of respective RRBs.

Q.2. What details are required to check the Railway Assistant Loco Pilot Result?

Ans. Candidates are required to key in their User ID and Password in order to access the RRB ALP Result.

Q.3. What details are mentioned in the RRB ALP Scorecard?

Q.4. How do I check RRB Ahmedabad Result?

Ans. Candidates who appeared for ALP exam from Ahmedabad region are required to check their result by visiting the RRB Ahmedabad website and click the result download link available.

Q.5. Is RRB ALP Result calculated based on normalized marks?

Ans. Yes, the result for Railway ALP exam is calculated based on the normalised marks.

Q.6. Does the Railway Board release the RRB ALP result for all the stages together?

Ans. No, the Railway Recruitment Board releases the RRB ALP Result for all the stages separately.

Q 7. When does the board release the cut off marks for ALP exam?

Ans. The cut off for Railway ALP exam is announced along with the release of the RRB ALP result.

Q 8. Does the Railway Board send the hard copy of the ALP result sent to candidates by post?

Ans. No, the Railway Recruitment Board clearly mentions in the official notification that no communication related to result, admit card or any other type will be done via post.