Candidates can get a lot of idea about the RRB ALP exam related dates in the given link.

RRB ALP 2019 – The Railway Recruitment Board has not notified about the recruitment of RRB ALP 2019 yet. Any update regarding the same will be notified to the candidates as soon as the notification releases.

This article gives an idea about the RRB ALP date sheet for different years and the stages of the RRB ALP exam.

The RRB conducts different exams to recruit candidates for various posts like Assistant Loco Pilot (ALP), technician, NTPC under the Indian Railway Ministry. Candidates can check the details regarding other RRB exams in the linked article.

The official RRB ALP notification for the 2020 exam has not been released on the official website of RRB.

The tentative RRB ALP Exam date 2020 are as follows:

The official RRB ALP notification for the 2019 exam has not been released by the Railway Recruitment Board. candidates are advised to keep a track of RRB ALP Notification page for regular updates on the same.

The tentative RRB ALP Exam date 2019 are as follows:

The last recruitment notification released by the Railway Recruitment Board was fro the year 2018. the important dates and information for the same are given below.

The Railway Board released the RRB ALP 2018 notification on February 3rd 2018. Candidates can check the important dates for reference.

The RRB ALP update is an important piece of information required for the candidates.

The RRB Notification gives all relevant ALP updates related to the exam.

The RRB has released the following notice related to the ALP Exam: 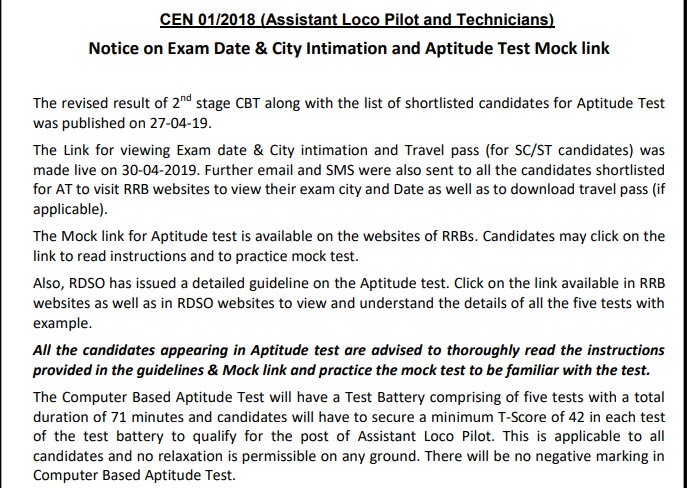 The Railway Recruitment Board (RRB) has released the RRB ALP Notification 2018 for 60000 vacancies of ALP & Technician posts which has been increased up to 64371.

For more updates on the exam dates, candidates can refer to the RRB ALP Notification.

Ans. The Railway Board announces the exam dates for ALP recruitment through official notification and as of now, the board has not yet released any notification with regards to RRB ALP 2020 exam.

Q 2. When was the last ALP recruitment conducted?

Ans. The last ALP exam conducted by the Railway Recruitment Board was for the year 2018 i.e. RRB ALP 2018. Candidates are awaiting the official notification of RRB ALP 2019 examination.

Q 3. How many stages are there in RRB Assistant Loco Pilot examination?

Ans. Candidates who want to get selected for RRB ALP post need to clear four stages of the Exam that are CBT I, CBT II, CBAT (for specific candidates) and Document Verification/Medical Examination.

Q 4. What is the minimum salary candidates get after getting selected for RRB ALP & Technician Post?

Q 5. What is the minimum cut off marks for general category in RRB ALP examination?

Ans. Candidates belonging to the unreserved category have to attain a minimum 45% marks in BCT I and CBT II in order to clear the ALp exam. Detailed RRB ALP Cut Off marks can be found in the given link.