“Eukaryotic cells are the cells that contain a membrane bound nucleus and organelles.”

What is a Eukaryotic Cell?

Eukaryotic cells have a nucleus enclosed within the nuclear membrane and form large and complex organisms. Protozoa, fungi, plants, and animals all have eukaryotic cells. They are classified under the kingdom Eukaryota.

They can maintain different environments in a single cell that allows them to carry out various metabolic reactions. This helps them grow many times larger than the prokaryotic cells.

The features of eukaryotic cells are as follows:

The cytoskeleton is present inside the cytoplasm, which consists of microfilaments, microtubules, and fibres to provide perfect shape to the cell, anchor the organelles, and stimulate the cell movement.

It is a network of small, tubular structures that divides the cell surface into two parts: luminal and extraluminal.

Endoplasmic Reticulum is of two types:

These are the main site for protein synthesis and are composed of proteins and ribonucleic acids.

They are known as “suicidal bags” because they possess hydrolytic enzymes to digest protein, lipids, carbohydrates, and nucleic acids.

These are double-membraned structures and are found only in plant cells. These are of three types: 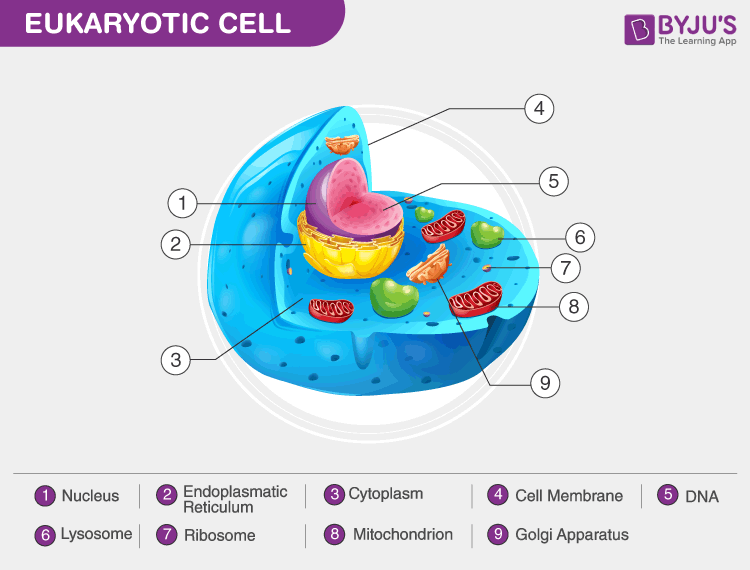 Eukaryotic Cell Diagram illustrated above shows the presence of a true nucleus.

The eukaryotic cells divide during the cell cycle. The cell passes through different stages during the cycle. There are various checkpoints between each stage.

In this stage, the cells grow and take in nutrients to prepare them for the division. It consists of three

On division, each daughter cell is an exact replica of the original cell.

The cell wall is made up of cellulose, which provides support to the plant. It has a large vacuole which maintains the turgor pressure. The plant cell contains chloroplast, which aids in the process of photosynthesis.

The cell wall is made of chitin. Some fungi have holes known as septa which allow the organelles and cytoplasm to pass through them.

These do not have cell walls. Instead, they have a cell membrane. That is why animals have varied shapes. They have the ability to perform phagocytosis and pinocytosis.

Protozoans are unicellular organisms. Some protozoa have cilia for locomotion. A thin layer called pellicle provides supports to the cell.

Are eukaryotic cells unicellular or multicellular?

Viruses are neither eukaryotes nor prokaryotes. Since viruses are a link between living and non-living they are not considered in either category.

What are the salient features of a eukaryotic cell?

A eukaryotic cell has the following important features:

How does a eukaryotic cell divide?

A eukaryotic cell divides by the process of mitosis. It undergoes the following stages during cell division:

When did the first eukaryotic cell evolve?

The first eukaryotic cells evolved about 2 billion years ago. This is explained by the endosymbiotic theory that explains the origin of eukaryotic cells by the prokaryotic organisms. Mitochondria and chloroplasts are believed to have evolved from symbiotic bacteria.

What is the evidence for endosymbiotic theory?

The first evidence in support of the endosymbiotic theory is that mitochondria and chloroplast have their own DNA and this DNA is similar to the bacterial DNA. The organelles use their DNA to produce several proteins and enzymes to carry out certain activities.