A natural catastrophe having unfortunate consequences is called a disaster. Biological disasters are natural scenarios involving disease, disability, or death on a large scale among humans, animals, and plants due to micro-organisms like bacteria, or viruses, or toxins.

What is a Biological Disaster?

Charles Baldwin developed the symbol for biohazard in 1966. 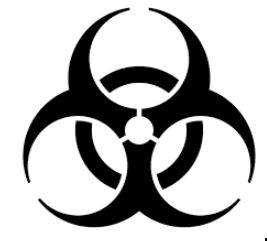 The US Center for Disease Control classifies biohazards into four biosafety levels as follows:

The following legislations have been enacted in India for the prevention of biohazards and implementation of protective, eradicative, and containing measures when there is an outbreak:

The basic measure to prevent and control biohazards is the elimination of the source of contamination.

Preventive Measures for workers in the field (medical):

Prevention includes the following measures that should be taken before (preventive), during, and after any outbreaks.

Detection and Containment of Outbreaks:

This consists of four steps as given under:

In the Ministry of Health & Family Welfare (MoH&FW), public health needs to be accorded high priority with a separate Additional Directorate General of Health and Sanitation (DGHS) for public health. In some states, there is a separate department of public health. States that do not have such arrangements will also have to take initiatives to establish such a department.

What is a biological disaster?

Biological disasters are natural scenarios involving disease, disability or death on a large scale among humans, animals and plants due to micro-organisms like bacteria, or virus or toxins.

What are the cause of biological disaster?

Biological disasters might be caused by epidemics, accidental release of virulent microorganism(s) or Bioterrorism (BT) with the use of biological agents such as anthrax, smallpox, etc.