Rajya Sabha TV programs and discussions are very insightful and informative from a UPSC perspective. In this article, we provide a gist of the RSTV Big Picture debate on the recent G7 Summit. This topic is important for the international relations section under the UPSC syllabus. 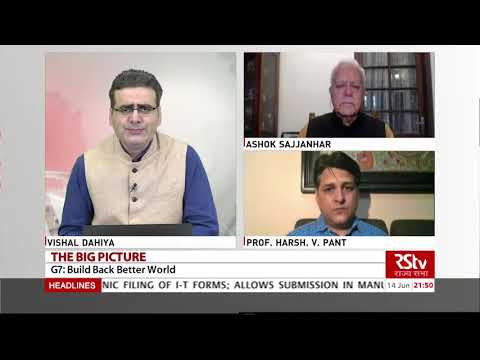 G7 has decided to launch a new global infrastructure initiative ‘build back better world’ based on value-driven, high standard, and transparent partnerships. This initiative will meet infrastructure challenges in low & middle-income countries with a focus on climate, health, digital technology & gender equality, and equity.

The G7 or the Group of 7 is a group of the seven most advanced economies as per the International Monetary Fund (IMF). The seven countries are Canada, the USA, UK, France, Germany, Japan, and Italy. It was formed in 1975 in the backdrop of the oil crisis. At that time, these countries contributed to 70% of the world’s GDP which has now reduced to 40%.

A ‘D10‘ club, consisting of G7 countries – UK, US, Italy, Germany, France, Japan, and Canada – plus Australia, South Korea, and India, aims to create alternative suppliers of 5G equipment and other technologies to avoid relying on China.

Carbis Bay Declaration – It refers to a series of commitments to curb future pandemics by fast-tracking the development and licensing of vaccines and the creation of diagnostic tools within 100 days.

The One Belt One Road Initiative/Belt and Road Initiative (OBOR/BRI) is the global development strategy initiated by the Government of China involving infrastructural development and direct investments in many countries across the continents of Asia, Europe, Africa, and the Americas. China, via BRI, is involved in around 2000 projects spread across 100 countries.

India is a natural G-7 ally by means of:

This is a significant avenue to counter the geo-encirclement of India by China.

Such a platform could be used to ramp up domestic manufacturing and infrastructure and become a part of global supply chains. This will have a multiplier effect on Indian economy and help us in reaching the goal of a $5 trillion economy by 2024-25.

The build back better initiative provides a golden opportunity to India to retake its position of ‘Jagatguru’ and strive for greater authority in global affairs.
Read all the RSTV articles in the link.