The Belt and Road Initiative, known in Chinese and formerly in English as One Belt One Road or OBOR for short, is a global infrastructure development strategy adopted by the Chinese government in 2013 to invest in nearly 70 countries and international organizations.

The initiative was incorporated into the Constitution of China in 2017. The Chinese government calls the initiative “a bid to enhance regional connectivity and embrace a brighter future.” The project has a target completion date of 2049, which will coincide with the centennial anniversary of the People’s Republic of China (PRC)’s founding.

With regards to the IAS exam, One Belt One Road (OBOR) is an important topic it has implications for India’s foreign policy and economy. The topic is covered under UPSC Mains GS-II (Indian Polity, Governance and International Relations.)

This article will detail the history, objectives, latest developments and India’s stand regarding the One Belt One Road initiative.

What is the One Belt One Road initiative?

The OBOR initiative was announced in 2013 by China’s President Xi Jinping. The ‘Belt’ refers to the ‘Silk Road Economic Belt’, which is a series of overland routes reminiscent of the Silk Road of antiquity and the late middle ages, while the ‘Road’ refers to the sea routes, which is also referred to as the 21st Century Maritime Silk Road.

The OBOR has been referred to as the Belt and Road Initiative (BRI) since 2016 due to the Chinese government’s consideration of the word ‘one’ is prone to misinterpretation. The Chinese media however still refers to it as the One Belt One Road to this day.

The image below represents the expected route map of the One Belt One Road initiative. 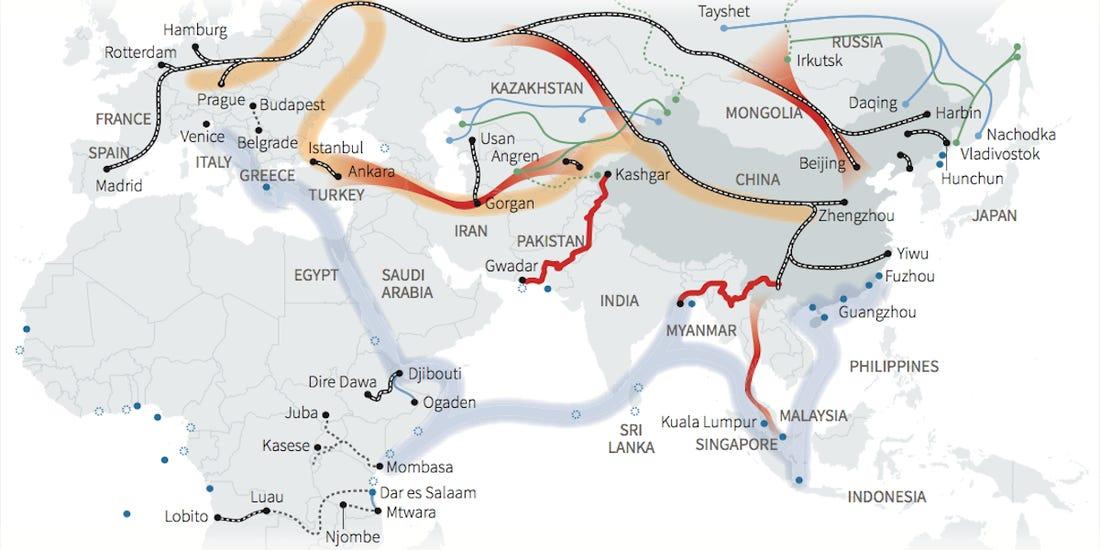 Objectives of the OBOR

The objectives of the OBOR are as follows:

To summarise it the ultimate objective of the OBOR will address the infrastructural gap and accelerate potential economic growth across the Asia Pacific region, Africa and Eastern Europe

Analysis of the OBOR

China experienced rapid growth from the 1980s to the early 2000s with an increase of production and investment powered by the country’s integration into regional cross-border production works. The Great Recession of 2008 and the subsequent decline in world trade dented the economic growth of China, as it severely hampered the export-oriented growth strategy. Thus it was decided that a new economic strategy had to be formulated. The foundation of this strategy was a major investment program financed by massive money creation and low-interest rates. It was believed that such a plan would counter the effects of declining external demand.

There are many important economic and geopolitical factors at play regarding the initiative, but given its own domestic economic challenges, it is more likely to be focused on the former.

Many of its proposed infrastructure projects run through some of China’s underdeveloped regions as it could provide a much-needed stimulus for its economic slowdown. It is the belief of Beijing that this improved connectivity between its poor and richer provinces will give way to improved economic integration and regionally balanced growth.

With regards to foreign policy, the OBOR reflects many of the priorities in improving relations with its neighbours, which is on the tethers due to a myriad of border disputes. Overall the long-term successful implementation of this initiative would improve cross-border trade and financial inflows from the entire Eurasian regions.

In addition, the geopolitical implications of this initiative must also be taken into account. China will use the OBOR to counter the status-quo of the USA as a world power. By strategically investing in nations around the world especially in dockyard and airport infrastructures, it is possible for China to counter any moves that will be detrimental to its interests.

Major Concerns about the OBOR in Asia and Beyond

The implementation of the OBOR will pose significant risks and challenges for China’s neighbours and itself. Some of them are as follows:

India’s Stand on the OBOR initiative

Options for India regarding OBOR

Advantages of OBOR for China