The 21st Century Maritime Silk Road is an important topic for the GS-III and GS-II papers of the UPSC exam. This is an important part of the International Relations and Economy sections of the IAS syllabus.

It was announced by Chinese Premier Xi Jinping in October 2013.

It is the sea route part of the OBOR initiative, which is a strategic investment venture that is aimed at fostering economic cooperation across the entire historic Silk Road region. The China -Pakistan Economic Corridor (CPEC) is just one of many extensions to the new Silk Road.

This article will give further details about the 21st century Maritime Silk Road within the context of the Civil Services Examination.

To this end, China has invested in many ports in the ensuing years, along with some of them being leased to Chinese companies as part of the development and reconstruction program. These ports will play a crucial role in projecting China as a pre-eminent maritime power.

Some of them are as follows:

The proposed routes of the Road are given in the image below: 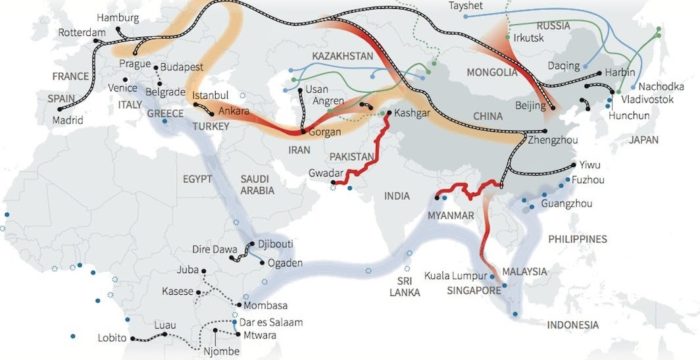 Aspirants can go through the International Relations Notes for UPSC on the linked page.

There is a long list of unresolved territorial disputes in the South China Sea and South-East Nations such as Malaysia, Indonesia, Brunei etc. The routes proposed most likely will lead to even more tensions between these nations. Analysts, however, are optimistic that the Road initiative can resolve these disputes by presenting an opportunity for mutual gain.

It is also speculated that the future of the Road will largely depend on the economic conditions of the participating nations. China will have to foot the bill for the economic development of nations that are in poor economic conditions. Thus China will have to see to it that the loans given in this regard are put to good use. At the same time, China might leverage political clout and demand concessions, some of them unfair ones, in lieu of the money invested. This will prove a deterrent to those nations about joining the MSR initiative.

The other key challenge is getting India’s support in order to bring the initiative to a fruitful conclusion. India represents a strong deterrent to the MSR’s objectives in the Indian Ocean primarily as an economic force. Keeping its own security interests in mind, the Indian government is likely to prefer to develop the regions within its sphere of influence on its rather than letting some other nations do it. Although China’s investment could solve most of India’s maritime infrastructural woes, the Indian government is skeptical of such an offer as there is a possibility that it is mainly for driving China’s territorial and economic ambitions

India has also expressed circumspection in participating in a similar initiative, the Bangladesh-China-India-Myanmar economic corridor.

What is the China Maritime Silk Road?

The Maritime Silk Road/Route flourished between 2nd century BC to 15th century AD as a trade route over the sea/ocean from China to Indian sub-continent and to Europe. It has been revived now as a modern diplomatic and trade initiative.

How long would it take to travel the silk route?

As per sources, the time taken for a round trip from China to Europe would take almost two years.