The South China Sea is considered to be one of the busiest waterways in the world and is a significant gateway for trade and merchant shipping. The South China Sea disputes are maritime and island claims between different sovereign states in the region. The countries party to these disputes are China, Brunei, Taiwan, the Philippines, Vietnam, and Malaysia and are geopolitically located in the Indo-Pacific region.

This article will provide the following relevant facts on the South China Sea dispute from the IAS Exam perspective:

What is the South China Sea Dispute?

The regions of contention are the Spratly Island, the Paracel Island, maritime boundaries in the Gulf of Tonkin and other places. Waters near the Indonesian Natuna Islands are also disputed. The reason why these areas are disputed and of interest to the concerned nations is the acquisition of fishing areas around the two archipelagos; suspected crude oil and natural gas in different parts of the South China Sea; and the control of strategically important shipping lanes. 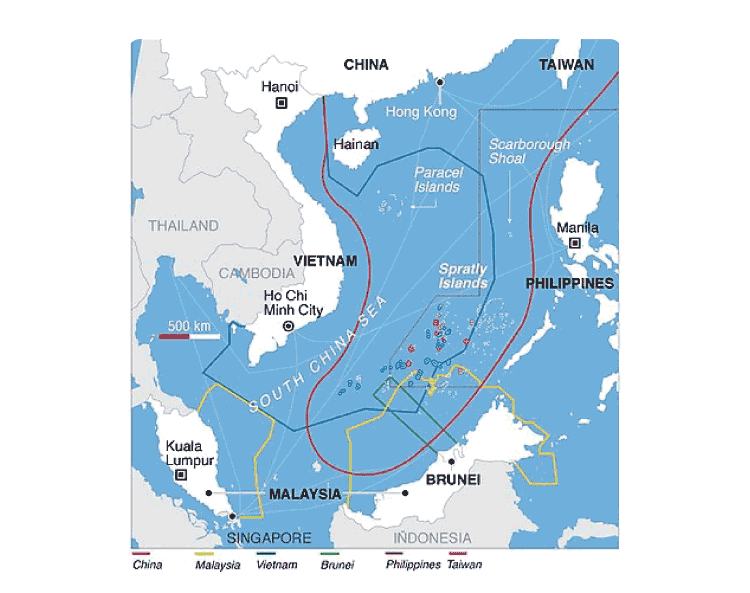 At the height of World War II, the Imperial Japanese Army and Navy had used several islands for military reasons and stated that these islands were unclaimed, despite historical records that showed that France had controlled some of those islands before their colonial possessions fell into the hands of the Japanese. Upon the end of the war, the 1951 Treaty of San Francisco forced Imperial Japan into giving up any territory they had conquered during the war. The People’s Republic of China made various claims to the islands during the 1951 treaty negotiations.

To know more about topics of International Relations, visit the linked article

Chinese claims in the South China sea are described in part by the nine-dash line. Originally an “eleven-dashed-line,” this line was first indicated by the Kuomintang government of the Republic of China in 1947, for its claims to the South China Sea. When the Communist Party of China took over mainland China and formed the People’s Republic of China in 1949, the line was adopted and revised to nine dashes/dots, as endorsed by Zhou Enlai. China’s 1958 declaration described China’s claims in the South China Sea islands based on the nine-dotted line map. The legacy of the nine-dash line is viewed by some PRC government officials, and by the PRC military, as providing historical support for their claims to the South China Sea.

Modern International laws and proofs from history explain how the different territories are raising their concerns and claims on the Sea regions. Given below are the various claims raised by the different countries involved in the dispute:

The image below gives a visual representation of the parties involved in the South China Sea Dispute: 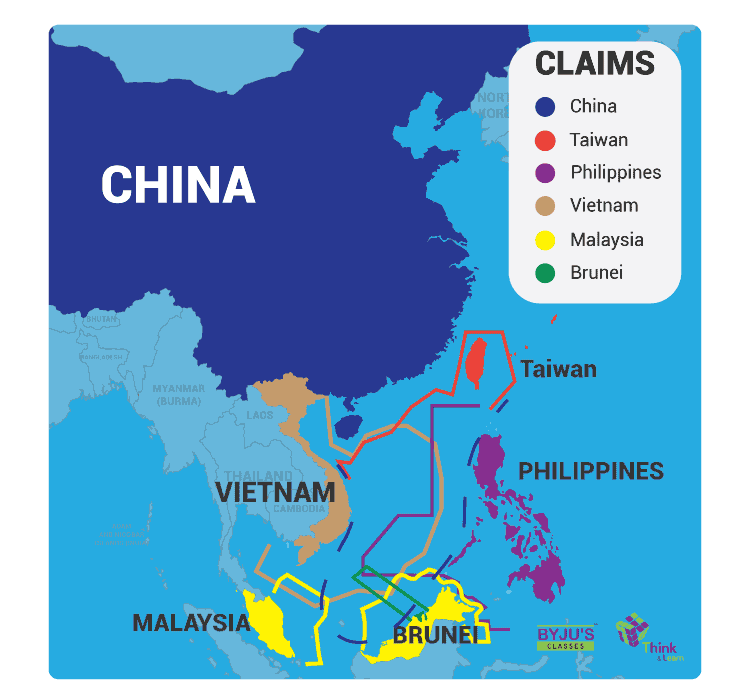 Also, the US is playing a very important role in mending the dispute because it has wide-ranging security commitments in East Asia and is allied with several of the countries bordering the South China Sea, such as the Philippines, Singapore, and Vietnam. So any dispute among them will directly affect the US.

Under the ‘Look East’ policy, India has been taking a higher position at the global high table- this was reflected in the joint statement issued in September 2014, by the Governments of U.S. and India when Indian PM Narendra Modi, traveled to the U.S. The joint statement “urged the concerned parties to pursue resolution of their territorial and maritime disputes through all peaceful means, following universally recognized principles of international law, including the United Nations Convention on the Law of the Sea.”

Since the South China Sea Dispute has been affecting many territories, the concerned authorities need to come to a resolution to solve the dispute so that the economic growth of the countries is not affected. Also, it is important that the claimant nations do not escalate the issue, but work on arriving at a consensus through effective diplomacy.

Judicial verdicts on issues of contested sovereignty have had historical precedents of triggering a nationalist backlash. It is thus important to consider possible solutions to this dispute. Some measures are as under:

China has put forward a bilateral negotiation point of view but it has not been accepted by the other countries. This is because the other countries believe that China because of its size may have an unsaid advantage in the distribution of the water body.

ASEAN has also been involved in solving the dispute but the decision has yet been taken. But resolving the dispute has become important because it is affecting the trade across the world and especially an issue for the US regarding security issues.