Dr. Sunanda Nair became the first in India to acquire a Master’s degree in Mohiniyattam. She completed her Ph.D. thesis in Intrinsic Lyrical Feminism in Mohiniyattam from Mumbai University.

Mohiniyattam is one of the two classical dance forms that originated in Kerala, the other one being Kathakali. Mohiniyattam gets its name from the word ‘Mohini’, the feminine form of Lord Vishnu; the word means ‘dance of Mohini’. 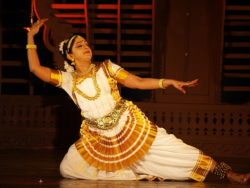 In the art and culture section of the UPSC syllabus, various dance forms including the classical forms are important. Questions can be asked in the IAS prelims on the Indian dance forms, their histories, and other particulars. In this article, you can read all about one of the classical dances of Kerala, Mohiniyattam.

Like most other classical dances of India, Mohiniyattam’s underlying traditions are found in Bharata Muni’s Natya Shastra.

There are sculptures of female dancers in poses similar to those seen in Mohiniyattam found at the 11th century Vishnu temple at Thrikodithanam, Kottayam.

A few texts that find mention of Mohiniyattam:

The dancer wears a white or cream plain saree adorned with coloured or gold brocade weaved in its fringes in the typical Kerala style. The artist also wears gold jewellery on her neck, arms, hands, ears, etc.

The music accompanying this dance form is based on the Carnatic style.