The Doctrine of Lapse was an annexation policy followed widely by Lord Dalhousie when he was India’s Governor-General from 1848 to 1856. It was used as an administrative policy for the extension of British Paramountcy. Important for IAS Exam, aspirants should know the facts about the Doctrine of Lapse from prelims and mains perspectives.

This article will introduce the Doctrine of Lapse along with its feature and names of the states annexed under the policy.

Who was Lord Dalhousie & What is the Doctrine of Lapse? 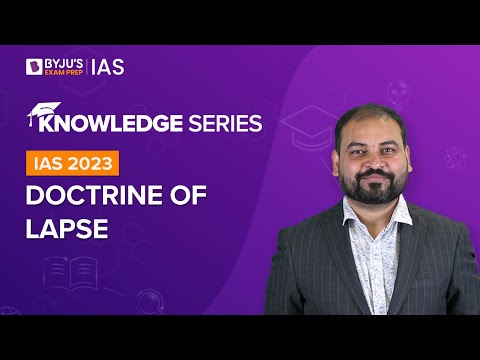 James Andrew Broun-Ramsay, 1st Marquess of Dalhousie, known commonly as Lord Dalhousie, was the Governor-General of India from 1848 to 1856. He had been a famous Scottish statesman.

Now, although he is commonly associated with the Doctrine of Lapse, it was devised by the Court of Directors of the East India Company as early as 1847 and several smaller states had already been annexed under this doctrine before Lord Dalhousie took the position of the Governor-General. The policy was used far more extensively by him to expand the territorial reach of the East-India Company.

The Doctrine of Lapse was an annexation policy extensively applied by East India Company in India until 1859. The doctrine stated that any princely state under the vassalage of the company will how its territory annexed should the ruler of the said state fail to produce an heir. The doctrine and its application were regarded by many Indians as illegitimate.

The Doctrine of Lapse was one of the underlying factors that led to the revolt of 1857.

To know more about the Governor Generals of Bengal and India, visit the linked article

Features of Doctrine of Lapse

Before the introduction of this doctrine, the princely states had a ritualised method of adoption practised for centuries  An heir apparent would eventually be selected from a pool of candidates, who were groomed for succession from an early age, called bhayats if no competent born-to son were produced (an obviously unsuitable or treasonous born-to son could be excluded from the succession).

If the ruler died before adopting a successor, one of his widows could adopt an heir, who would immediately accede to the throne. The adoptee would cut all ties with his birth family. Once the Doctrine of Lapse came into place the following features were now faced by the Indian rulers.

To know more about the legislation passed in British India, click on the linked article.

The Doctrine of Lapse – States Annexed

The states that were annexed under this policy are given below in chronological order:

Effects of Doctrine of Lapse